Four-star Hotel Ballard is slated to open at 5214 Ballard Avenue in May. The property is owned by James and Debera Riggle who also own Olympic Athletic Club and Ballard Inn.

Hotel Ballard will offer a unique boutique experience, yet to be seen in the Ballard hotel market. The hotel will house 29 rooms, designed by Mike Skidmore Architect, ranging from $189 to $429 per night. Each room will be equipped with complimentary wifi and guests will have 24 hour access to the neighboring Olympic Athletic Club.

Construction began in August 2011 with the vision of opening in Spring 2013. The Riggles reported that it cost $15.9 million to develop the hotel and a further $500,000 to simultaneously renovate Olympic Athletic Club next door. 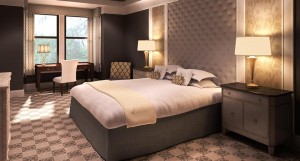 “We wanted to build a hotel that would not only be an extension of the Olympic Athletic Club and offer a respite for locals, but a place where travelers can come and celebrate special occasions as well as enjoy all that Ballard has to offer,” said James Riggle.

The boutique hotel is being built on the site of the first bowling alley in Ballard. Seattle architects Gordon Lagerquist and Gene Morris designed the façade of building. They included a handmade stucco and sandstone and wood panels to ensure that the hotel’s façade featured a similar feel to that of the historic Ballard Avenue buildings surrounding it.

The lobby, designed by Janet Hendrich and Debera Riggle, features custom chandeliers and an extensive library that wraps around a sandstone fireplace. The hotel will also feature a street-level restaurant, Stoneburner and a rooftop pavilion boasting views of the city and the Olympic Mountains. 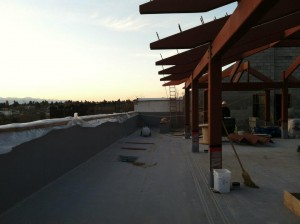 Other owners of the hotel are John Lowrance and Adele Maruo.

Hotel Ballard are now taking bookings for May on their website.

To find out more and get updates on the construction click here to visit Hotel Ballard’s Facebook page.

We will update readers on the progress of construction and the opening of the hotel when the exact date is known.