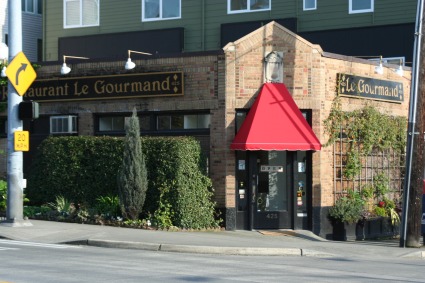 The space formerly occupied by Le Gourmand will be transformed into Brimmer & Heeltap, a gastropub from the creative genius of some of Seattle’s longtime industry professionals. It will be headed up by Jen Doak, former manager of The Tasting Room, and Revel chef Mike Whisenhunt.

Doak described her vision for the new restaurant to Seattle Eater:

I’ve been on the search for a space for probably three years. My inspiration all along has been the riff on an English pub. I love that in England, before they go home or after they go home, they’re able to go into their little neighborhood bar for a pint, for community, for food. The term ‘brimmer’ is a glass that’s full and ‘heeltap’ is the last tiny drag in your glass that you can never get out. The concept is everything that happens in between a full glass and an empty glass — you’re going to have food, you might talk to your neighbor. And again, the terms are English, so kind of playing on the old English pubs. We don’t want to be sleek, we don’t want to be modern. We want to be warm, quirky, intentional.

The new owners say they won’t be keeping the back bar that was Sambar, but will keep the adjoining garden. They plan to pull out the bar and rebuild it on the north wall of Le Gourmand side. Doak says she wants to have a breezeway to connect the two rooms instead of the hallway. They’ll also take out the front door of Sambar so the only entry point will be the front door.

Le Gourmand closed their doors last summer, and has been for sale until Doak closed the deal just a few days ago. Brimmer & Heeltap should be ready for business sometime this fall, and will be open six days a week, closed Tuesdays. They’ll have happy hour from 3 to 5 p.m., dinner from 5 to 10 p.m., and late night happy hour 10-midnight.

We’ll keep you update on their opening, and check out their Facebook page for more info.