The Kiss Cafe has raised $15,o00 for Ballard musician and woodworker Asher Deaver. The cafe hosted an all-day fundraiser on Saturday, with raffles and auctions that brought in thousands of dollars for the young man who undergoes brain surgery on tomorrow (Tuesday, July 30) to remove a tumor from his frontal lobe. (Read his story here) “I’m still in shock,” Deaver says. “I keep flipping between feeling elated and feeling like I don’t deserve it. I never would have expected anything like what happened. It was such an incredible night.”

The bar filled with faithful regulars, friends and family wearing buttons boasting hopeful slogans such as, “Die Tumor Die” and “More Beer Less Tumor.” Beer flowed from kegs donated by Bad Jimmy’s, Sierra Nevada, and Acme, the proceeds from which went to Deaver.  In addition to the raffle and auction, all tips went straight to his fund. 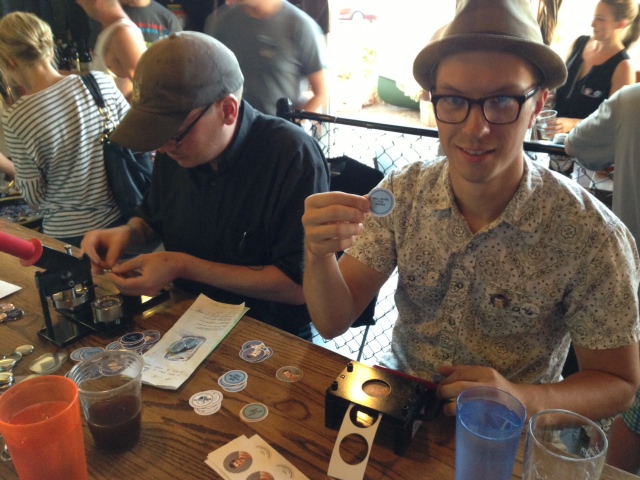 One of the biggest donations of the night was the first-ever order of “Veruca Salt,” a menu item which reads,”I want it now, Daddy! Anything on this menu, delivered ahead of all other orders – $1,000.” The couple who ordered it asked that the money go straight to Asher. There were three different donations of $1,000 for Asher, and customers and friends were tipping anywhere from $50 to $100 on every drink ordered at the bar that night.

“This event was so heart-touching, tear-jerking and breath-taking,” Kiss Cafe co-owner Brenda Reed says. Hundreds of people passed through the cafe that day, as people spilled out of the doors, raising beers to Asher. The cafe even got a one-day permit to have outdoor drinking (thanks to Agent Dean, Reed says).”My mind is still trying to process the generosity of customers, businesses, and vendors. Even though the fundraiser has come and gone, this journey is far from being over for Asher.” The night was a huge success, raising $12,000 in one day ($3,000 was donated before the event even started).

If you want to help, the fundraiser is still going. Kiss Cafe is raffling off an iPad and a two-night stay at the Inn at Langley. Tickets are $10 and can be bought through the end of the week; the winners will be drawn next Monday. And, the Indiegogo fund (which has independently raised almost $11,000) is live until tomorrow. “You never go broke by giving,” Reed says.