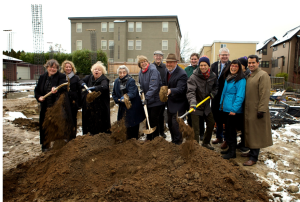 Cheryl Chow Court will, according to LIHI, be built “green” and will feature 50 units and a rooftop garden for seniors in Ballard.

“LIHI is delighted to provide affordable senior housing in one of the most attractive, livable, and walk-able neighborhoods in Seattle,” says LIHI Executive Director Sharon Lee.

A Ballard Urban Rest Stop, which is set to provide free showers, laundry and restrooms to homeless men, women and children, is planned for the first floor of the building.

The complex has been named after Cheryl Crow, once chair of the Seattle City Council’s Housing and Human Services Committee who was instrumental in creating the downtown Urban Rest Stops 14 years ago. “LIHI admires and praises Cheryl Chow for her fearless leadership,” says Lee.

During her career Chow also worked to get Seattle Council approval for the development of housing for homeless families and youth at former Sand Point Naval Station at Magnuson Park. Chow has worked hard to ensure that homeless people have somewhere to stay in our city.

LIHI is honored to have broken ground on the Cheryl Chow Court development. “With the constructing of over 1200 new luxury apartments in Ballard, the complex will be a much needed affordable option for seniors,” says Lee.