Lots of burglaries in Ballard, but not just a problem in our neighborhood – My Ballard Skip to main content

This Seattle Police crime map is certainly startling: it shows the location of every police report taken for a burglary from the beginning of December through yesterday. When there are several reports in close proximity of each other, the map shows a number: 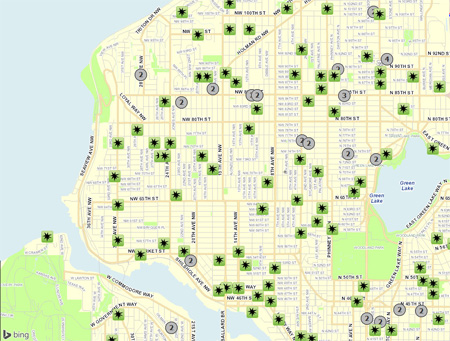 The majority of these burglaries took place in December and early January, a very popular time of year for thieves looking to capitalize on the holidays. Perusing the police reports, many took place in the evening hours when people are away, and residents call the police when they arrive home later that night. Burglars also tend to sneak into the house from the back.

And as you can see, Ballard isn’t the only target, despite the fact a certain TV station called it a “bold burglary spree in Ballard.” North Seattle as a whole has a large concentration, as well as the Central District and parts of West Seattle. Interestingly, Magnolia and the top of Queen Anne have very few in comparison.

For ideas on how to prevent burglaries, SPD has compiled these tips.

By the way, check out our new Ballard crime section with police dispatches.