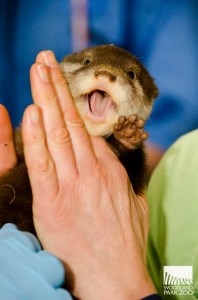 The four newest residents at Woodland Park zoo received a clean bill of health today during their first, hands-on wellness exam. The four pups, three females and one male, were born to 4-year-old mother Teratai and 8-year-old father Günter on January 20.

The little ones tipped the scales at a mere 1.2-1.5 pounds each which is healthy size for their age. They all received thorough neonatal exam to check their ears, eyes, mouths and overall development. All of the pups passed with flying colors and are growing healthily as expected.

Since the pups were born both their parents and older brothers (who are named after the Seahawks’ Legion of Boom) have come to the party to build their den nest, provide support and, most recently, teach the pups to swim in a behind-the-scenes pool. Check out the video below of the pups first swimming lesson:

Since they have their first swimming lesson, as Woodland Park Zoo describes, “under their pelts,” the otter pups were allowed in their outdoor exhibit for the first time today. However, their protective father had other ideas and did not let them explore the outdoors.

“We’ll try another practice introduction session and hopefully soon pups (and dad) will get comfortable out there in the Bamboo Forest Reserve,” says Woodland Park Zoo representatives. 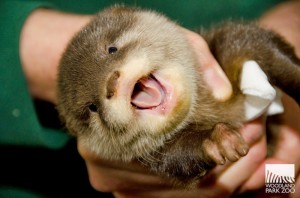 Viewing hours for the otters will remain irregular during the introduction sessions. Once an official début is planned we will be sure to inform readers!