A fire broke out on a 100-foot tug boat at Fishermen’s Terminal (1900 West Nickerson Street) at 3 p.m. Wednesday and quickly escalated to two alarms.

According to the Seattle Fire Department’s spokesman Kyle Moore, the tug boat’s crew believed that fire started in the engine room. 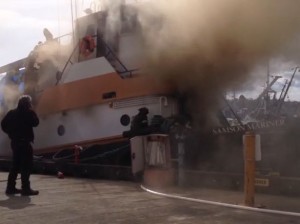 “It must have gotten out of control, because they evacuated,” Moore said.

Video from Kiro 7’s chopper showed excessive smoke coming from the front of the vessel.

No injuries were reported and the cause of the fire is now under investigation by the Seattle Fire Department.