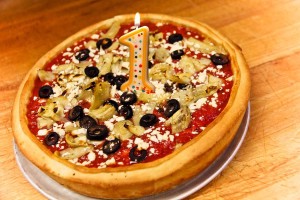 The My Ballard heard from Paxti’s management this morning who confirmed that Paxti’s will be opening in July this year, as opposed to May as Seattle Eater reported yesterday.

A miscommunication caused some confusion around the opening month.

We will be sure to update readers with more information before the opening this summer. Thanks for your understanding!

According to Seattle Eater, Patxi’s Pizza (pronounced pah-cheese) is set to open next month in the former Dolce Vita space at 5323 Ballard Ave NW.

We covered the story last September when the 10-year-old California-based chain annouced their expansion into Washington.

Patxi’s Pizza is famous for their Chicago-style pies and their menu reportedly includes a stuffed pizza that bakes for 40 minutes.

You know who eats Chicago style pizza in Chicago? Tourists.

Wow! And I was just saying the other day, Ballard really needs another California chain!

It’s a great place for families with children, which is a nice addition to the neighborhood.

Stuffed pizza is the bomb. A gut bomb, but awesome none the less.

What other California chains are in Ballard?

If you want a local, great Chicago style pizza place, check out Kylie’s in Fremont. I hope this place goes down quickly and takes Five Guys with it.

Will they sell individual slices?
Since Snoose Junction closed, Ballard Pizza Company has had a monopoly on the late night quick slice and a beer crowd.
I don’t think they use enough sauce so would prefer an alternative. Also don’t want to buy an entire 5 lb. pie.

“It’s a great place for families with children, which is a nice addition to the neighborhood”

You must not get out much – every brewery in Ballard is open to kids/family, as is every restaurant and most of the pubs. Ballard is becoming one huge Red Robin, all that is needed is a small biplane hanging over Market St.

Tip to all California Chains: you may want to research the experience of The Counter over at the ‘Blocks before bringing your silly offerings to Ballard. We’re really not interested. However, Bellevue loves you! You will have streams of customers at a place called Belle Square (it’s behind the Beige Curtain, aka across the lake).

Actually Shawnster1016, we go out for dinner about 5 times a week. Not all of the places we go would be very fun for kids and we are usually out later than the family crowd anyway. But enjoy the early bird special! You sound fun!

Never been to Red Robin, so I doubt I’ll run into you.

I’m sure this place will do fine. Ballard has become a destination that people drive to from all over. The Counter was too far off the beaten path, Paxti’s will do fine in the thick of it.

I’ll stick to Ballard Pizza Company, but best of luck to our new neighbors!

“However, Bellevue loves you! ”

Yes, compared to Ballard, Bellevue is very diverse so people not afraid of new, shiny things.

@Mary Patxi’s are bland, sterile restaurants, with full bars and mediocre food. People drive to Ballard for the local, one off restaurants and bars. I’d be surprised if this place lasts a year.

Plus, Patxi’s are no more “a great place for families with children” than any of Ballards under 21 friendly places.

@Sam It’s true, Bellevue is very diverse! I saw at least FOUR different color Mercedes that last time I was in Bellevue. And that Bellevue Square, what a monument to civilized society!

We should all take advice from Bellevue and turn our neighborhood into a total corporate crud-hole.

Deep dish pizza is not really pizza. It’s like a gross, soupy pile of common pizza ingredients poured into a soggy, depressing bread bowl.
We really shouldn’t call that pizza.

your mom goes to college

Well, I guess we’ll have to wait and see how they do. They are well received in other cities and they have deep pockets, so I’m betting they’ll last.

People have to complain I guess, so flame away!

I am originally born and raised in NYC so I love my pizza. Paxti’s is awesome – why not wait til it’s here and you try it before you pass judgement?! I think it will fit nicely in Ballard – they even try crafty cocktails with a mixologist. And it’s not just kid friendly all the time (they have special events) – some of us enjoy a kid free place on occasion. I go to the Bay for business all the time and have been to many, even a Denver one. Let it evolve and give it a chance!

Chicago “pizza” isnt what pizza is supposed to be anymore than Manhattan ” chowder” is.
Rip Piecoras.

Listen haters, I moved up from SF 5 years ago and this was my FAVORITE pizza place. I actually like they’re thin crust better than the deep dish…but the deep dish is pretty fantastic too. Don’t give it a chance. That just means I don’t have to wait for a table!

As a Bay Area resident, I get a kick out of Patxi referring to himself as a “pizza expert” on thier website story… The 30+ year old iconic and employee owned Zachary’s in Berkeley is the true expert. Patxi worked there long enough to learn and steal their secret recipes before joining forces with his business partner, a former dot.com and real estate guy, and capitalizing on Zachary’s trade secrets. They’ve no doubt been highly $ucce$$ful in doing so including the recent sale of their controlling interest to a large private equity firm that is in the process of opening 60+ chain locations over the next few years–the same firm, Karp Rielly LLC, whose portfolio of businesses includes Dollar Tree and Hooters.