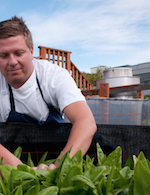 Chef Jason Stoneburner and the teams at Stoneburner and Bastille are excited to announce the opening of Blue Tractor Farm. The farm comprises of an acre of growing space in Redmond that is set to be mainained by Seattle Urban Farm Company, the organization that maintains the current rooftop garden at Bastille.

The plots at Blue Tractor were specifically tailored to provide produce that aligns with the flavors of each restaurant. Stoneburner’s section features varieties from the Mediterranean and Bastille’s plot comprises of traditional French plantings.

Seattle Urban Farm Company will be overseeing the farm and chefs from both Bastille and Stoneburner will be heavily involved with seed ideas and harvesting as the season progresses.

“Growing our own produce will grant us a unique kind of creative control in the kitchen,” says chef Stoneburner. “We’ll be able to get more of the obscure varieties that it can be hard to source but wonderful to cook with.”

Bastille, with management from Seattle Urban Farm Company, has been growing lettuce and herbs in their rooftop garden beds since 2009. The creation of the new farm space will add significant growing space to that already available in the rooftop garden.

After the crops are harvested from Blue Tractor, Chef Stoneburner is excited to report that a majority of the produce used at both restaurants will be locally sourced

The first seeds were planted early this month by Colin McCrate and the team at Seattle Urban Farm Company. The produce, which includes rose radishes, purple cauliflowers, golden beets and much more, will be hitting diners plates after the harvest next month.

You will be the worst author