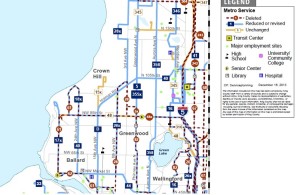 Voters in King County have until tomorrow to have their say in the future of Metro Transit in our city.

Proposition 1 asks voters for their decision regarding an increase in sales tax and car tabs to fund Metro and fix local roads.

In tomorrow’s Special Election, voters are being asked to consider the following:

If approved, Proposition 1 would fund, among other things, bus service, road safety and maintenance and other transportation improvements in King County cities and the unincorporated area. It would authorize the district to impose, for a period of ten years, a sales and use tax of 0.1% under RCW 82.14.0455 and an annual vehicle fee of sixty dollars ($60) per registered vehicle under RCW 82.80.140 with a twenty dollar ($20) rebate for low-income individuals.

Here in Ballard, if the measure fails, Metro will be reportedly cutting and reducing many routes that service our neighborhood (click on image above).

Many locals have expressed their opinions both for and against Proposition 1 throughout the campiagn. Our news partners at The Seattle Times explored some of the issues in depth in recent reports.

The Seattle Times also published an editorial with pros and cons of Proposition 1 as discussed in detail by Larry Phillips, Chair of the Metropolitan King County Council, and Bill Eager, Chairman of the Eastside Transportation Association.

Whichever opinion you hold about the issue, remember that ballots need to be postmarked by Tuesday, April 22 or dropped off at the Ballard Library ballot drop box (5614 22nd Ave NW) before 8 p.m. tomorrow night.

You people don’t make this fee fair. I have several vehicles and i am required to pay your fee on all of them. I am charged curently 5 times for the $ 20.00 fee now. If someone only has one car he or she only pays once. Why do you charge me for every vehicle i put tabs on. I can only drive one of them at a time. You are totaly ripping me and others in this state off. As soon as i retire i plan on moving out of this money hungry state.

Bruce, hopefully you have a small business that requires a fleet of vehicles. It’s a bit tough for the average Joe to sympathize if the perception is you personally:
– choose a different car to commute in depending upon your mood
– are a car collector complaining about tab fees for your shiny trove
– have a house so large here in Ballard that you can actually keep five cars and are still having an issue. Some might think the gardener will see a pay decrease
Good luck with your retirement!

Yeah, not much sympathy here.
Some of my neighbors own more than one car per driver at the household and their cars take up all the street parking.
The vehicles often sit for weeks on end without being moved. I say charge them up the wazoo.

@Bruce My property taxes go to pay for the roads for your five (!) vehicles. You are ripping me and many others off.

Don’t let the door hit you on the way to Texas!

Why should I be asked to pay thousands of dollars over 10 years to support a BLOATED BUREAUCRACY like King County Metro?
So they can waste even more of my tax dollars ? NO WAY!
VOTE NO ON PROP 1!

Everybody lives. Everybody pays.

My heart bleeds for the guy with 5 cars.

Haha, funny how these articles bring out the out of town trolls. Can anyone who lives in Ballard seriously be thinking that cutting Metro is a good idea? We need buses, they support our city and our neighborhood and our economy. What we need is more/better tranist — not less. VOTE YES.

I’m happy to support a service that provides congestion reduction, commute options, and a critical social service for those who cannot drive. I’m a Yes.

@Bruce, you’re funny. 5 cars in the city. Makes me think you’re not from around Ballard, or at least certainly an outlier.

@John, Thousands, really? $60 over 10 years is $600. If I were to spend $20,000 per year on taxable items (that’s a lot since housing and groceries don’t have tax), that’s another $20 per year in sales tax. That’s $800 over 10 years: that pales in comparison to my car payments, insurance, gas, and bus fares that I pay in just a couple months. A little price to pay for decent transit.

The media is failing to report what the effects of removing $130 million from our local economy every year will do to those who are unemployed or low income earners. The effects of removing that much money from the local economy will have far reaching impacts on the most vulnerable in our society. For the sake of the poor and underemployed please vote against this ill-conceived bill.

That is some of the most ridiculous logic I have seen Coryclassic. Thanks for the laugh!
(and don’t forget to vote YES, for the sake of the poor and underemployed who use Metro to get around).

I think you’re a troll who lives at home with mom and drives her ( one ) car.

I’m voting Yes, because although I have the luxury of choosing whether to drive to work or bus, I use public transportation 95% of the time. It’s more environmental, helps with traffic congestion, and it’s flexible.

I fear that if Prop 1 doesn’t pass, it will make lives harder for those whose ONLY option to get to work is to use Metro buses and those who are disabled and elderly.

I hope the rest of Seattle feels the way I do.

Although our economy here in Ballard is booming, the local economies of other neighborhoods in King County have not been equally fortunate. For the most part, the removal of so much money from our economy won’t have a major impact here but it will in other places where unemployment is still a problem.

I would at least like to see some attempts at reform. It is too easy just to turn to the people for more money without realizing the negative effects that has on the low income earners. I do not own a car so it doesn’t directly impact me but it is definitely a factor employer’s use when deciding where to locate a new business.

That being said if they can use the money they have more efficiently it can actually increase the likelihood of an employer moving to King co. This is what we should be attempting first.

@Coryclassic, reforms sound nice, and King County Metro has done a lot of them, as highlighted by the Seattle Transit Blog:
http://seattletransitblog.com/2014/04/01/vote-yes-on-prop-1-really/

But cutting transit service is not in the interest of the economy. Transit provides an opportunity for employees to get to and from work without the all the costs of a car, even if the employee works very early or late in the day (which is common in the lower-paying service industry). Transit also gets cars off the road, opening up critical roadway space for the movement of goods and services (plus other drivers).

King County is growing much faster than our transportation system. We should be expanding transit, not destroying it.

Metro is top heavy and needs to cut administrative costs, and some of those 100s making 100k plus! I might vote yes next time if they clean there house first. PS although Bruce sounds like a whiner he has the right to own as many cars as his heart desires! Also city planners and politicians have completely screwed up Transportation amidst all this growth they have allowed the developers to do with out props impact fees. what a mess. Peace

Two no votes in our house.

The average metro BUS driver makes over $100K a year and has a very, very rich retirement package. I’m voting NO. This is the umpteenth request for more money, always accompanied by a dire threat, and yet there are never any cuts to their budget. Give me a break. NO

Just making up random numbers ? According to Metro a senior drive can make up to $63K…

I love how some on the right love to demonize public sector employees. An age old strategy amongst the powerful to get the little people to fight amongst themselves…

nah, that’s cool metro – you can keep your hands out of my pockets.

There are actually five (5) yes-votes in my house.
and only ONE car for all of us.

If this prop fails, I will blame the dumb-ass, Dori Monson-listening crowd, who are the most bone-headed amongst us.

And down it goes. Common sense prevails.

“There are actually five (5) yes-votes in my house”

Not enough I guess.