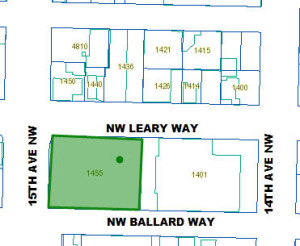 UW Medicine plans to open medical clinics in about half of the Program for Appropriate Technology in Health’s (PATH) former headquarters at 1455 NW Leary Way, according to a report from Marc Stiles of the Puget Sound Business Journal.

As noted in last week’s development update, a land use application was approved by the City of Seattle’s Department of Planning and Development to change 29,994 sq. ft. of office use in the space to medical office use, with no changes in parking. That application had originally been submitted in March.

As reported by Stiles, that ruling did not list the tenant, but UW Medicine/Northwest Hospital applied to the city in May for a construction permit to alter the first two floors of the building. Those permits are currently in the “Reviews Completed,” stage. Mechanical work permits to modify existing duct work in the building, among other changes, was submitted in June, listing Northwest Hospital as the “financially responsible party.” Those permits were issued late last month.

PATH left the building in 2010, moving to the South Lake Union neighborhood.

To read the full story from the Puget Sound Business Journal, click here.