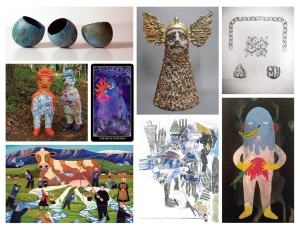 The Odin’s Eye art exhibition opens tonight at the Nordic Heritage Museum (3014 NW 67th St) as a part of the annual Taste of Iceland Festival. The exhibition includes work from a variety of artists from Iceland and will be open to the public until November 9.

The exhibition aims to build a bridge between Americans and Icelanders through the visual interpretation of Norse Mythology through the eyes and mediums of the different artists. Participating artists from Iceland include  Gunnella, Kristín Ragna Gunnarsdóttir, Sindri Már Sigfússon, Ingibjörg Birgisdóttir. Artists participating from the US include  Lulu Yee , Derek Weisberg, Pandora Andre-Beatty and Michael Linton Simpson. The exhibit is sponsored by Icelandair Cargo and Iceland Naturally.

“I lived in Iceland for 4 years and am fascinated with the connection Icelanders have with nature, their colorful heritage, their folklore, hidden people, elves, the Norse Gods,” said Lulu Yee, artist and curator of Odin’s Eye. “Iceland is a nation of great storytellers, and I wanted to work on a group show which addresses an aspect of the Icelandic heritage, while at the same time, viewing it through the lens of a foreigner who has had little exposure to those stories.”

Click here to learn more about the exhibition and other events that are part of this year’s Taste of Iceland Festival.