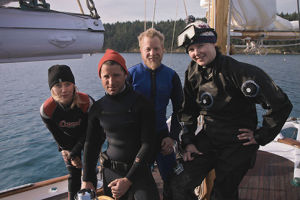 Ballard resident Captain Kevin Campion recently directed a new documentary film entitled The Unknown Sea: A Voyage on the Salish. The film was recently premiered during a 10 day film and music tour aboard the historic racing yacht Orion through the Salish Sea.

Captain Campion has been working as a marine biologist and mariner for over a decade and has a deep passion for marine education. Through the Deep Green Wilderness education program on the Orion he takes students out on the Salish Sea and teaches ecology and traditional sailing skills.

“Kevin has always wanted to show people the beauty and the complexities of this place, and help define this new name; Salish Sea,” says the film’s producer Shawnecee Schneider of the San Francisco Emmy Award winning film team DoF Media.

In 2013, Campion and Schneider teamed up to begin production on The Unknown Sea. Throughout the process they worked closely with SeaDoc Society and the underwater film team of s/v Silent Sun Films. After shooting was completed the team contacted Seattle native Mike Giacolino, of country folk band Ole’ Tinder, who worked on the soundtrack.

Campion and Schneider then embarked on a 10 day sailing trip on board the Orion where they screened the film all over the Salish Sea with each screening followed by a live music performance.

Check out the trailer below:

“It has been a great way to give the audience a unique cultural experience and a different way to engage with their environment,” says Campion.

“We know no film team has done this before. Sail to screenings, have live music, and show an educational and entertaining documentary about the Salish Sea and our place in it,” says Schneider.

There are two screenings coming up at the Friday Harbor Film Festival in early November and another in Astoria, Oregon.

Click here to learn more about the documentary and to find out details about upcoming screenings.

Photo of Captain Campion and his team courtesy of Deep Green Wilderness.