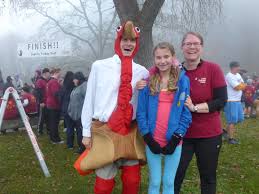 The 5 km fun run/walk raises funds for the Ballard Food Bank with participants making their way over the course from Sunset Hill to Golden Gardens Park.

The family-friendly event has early registration available until November 18 with entry costing $25 for adults and $15 for children 10 and under.

Last year’s Turkey Trot involved over 2,500 participants and raised over $90,000 to Ballard Food Bank. This year organizers expect closer to 3,000 participants to register.

Local cross country team members from Ingraham High School, Patrick & Kirby McDermott, will once again lead the Trot dressed as turkeys, or tofurkeys for vegetarians in the crowd.

“The work we do at the Ballard Food Bank is a community effort. The Turkey Trot is a great way for all of us to come together as we run, walk or trot for hunger. It’s also a fun event to kick-off Thanksgiving with friends and family,” says Jen Muzia, Ballard Food Bank Executive Director.

The event was originally started by three Ballardites Erin Fortier, Matt Ramme, and John O’Brien who traditionally went on a run with their families on Thanksgiving morning. “It was a way to spend time with family on the holidays and feel better about all the food we’d be eating for the rest of the day,” says Fortier.

The group began planning for a Seattle Turkey Trot after running in a similar event in Portland on Thanksgiving morning nine years ago. At that point no such Thanksgiving-day event existed in Seattle.

The trio then went about planning the local event in 2007 by sending friends email invites, printing t-shirts and mapping out a scenic route in Ballard. The first year 50 people turned out to participate and, according to Rammed, “had a great time”. Each year the event has grown and expanded, donating more funds to the Ballard Food Bank each time.

“During Thanksgiving, people spend a lot of time thinking about food. We want to raise money for those in our community who are helping the hungry,” says Matt Ramme, one of the event’s organizers. “We chose the Ballard Food Bank because it is a local Ballard non-profit and people can connect the run with a nearby organization.”

This year’s Trot is being organized by Fortier, Ramme, O’Brien and staff from the Ballard Food Bank.

Registration for the event is now open online.