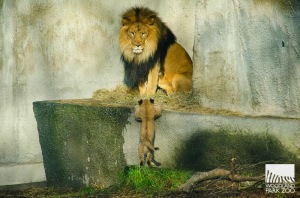 The team at Woodland Park Zoo is inviting locals to cast their votes from today through January 26 to help name the zoo’s three lion cubs.

Locals can cast their vote online for their three preferred names out of a list of names derived from languages that reflect parts of the South African lion’s native range.

The name with the most votes will automatically be chosen as one of the cubs’ names, and the zoo will leave it to the cubs’ parents to finish the task.

The second, third and fourth most popular names selected by the public will be presented to parents Adia and Xerxes as enrichment choices on Thursday, January 29. Each enrichment item will be associated with a name, and the two the parents touch first will be the names of the final two cubs.

Voters will also have the chance to enter a random prize drawing to win a ZooParent lion adoption.

“Our team of lion keepers selected 10 South African names for voters to choose from. We’re excited to have the community weigh in and help narrow it down for Adia’s and Xerxes’s final stamp of approval,” said Pat Owen, collection manager at Woodland Park Zoo.

The three male cubs were born on October 24 to mother Adia and first-time dad, Xerxes. The family has been living in the off-view maternity den where they have been able to bond and grow in privacy. The cubs’ public debut is set to be announced in the coming weeks.

In preparation, the triplets took their first steps outdoors with Adia and Xerxes during brief practice sessions that introduced the young cubs to their spacious exhibit. Click here to check out the photos.