Seattle’s Landmarks Preservation Board is set to consider nomination of the Wiggen & Sons Funeral Home (2003 NW 57th Street in Ballard) for landmark status. 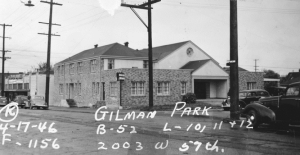 Locals are invited to attend the meeting and give their opinions on the nomination. Written comments will also be accepted at the mailing address below until  March 3 at 3 p.m.

A copy of the Landmark Nomination is currently available for public review at Ballard Library (5614 22nd Ave NW) and at the Seattle Department of Neighborhoods office in the Seattle Municipal Tower (700 5th Ave, Suite 1700).

Photo of Wiggen & Sons from 1946 courtesy of the Landmarks Preservation Board.