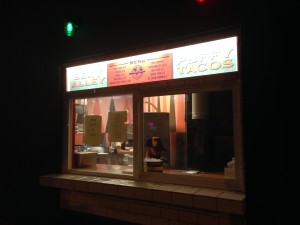 The anticipated opening of Hotel Albatross in the former Azteca space at 2319 NW Market St is finally here. Ballard’s newest watering hole, which features an on-street takeaway window, opened over the weekend

Hotel Albatross is a venture between three successful Ballard business owners Zach Harjo, from Ocho, and Keith Bartoloni and Andrew Church, from Hazelwood.

According to a Seattle Eater report, the new watering hole is set to serve up “exotic drinks” with an undertone of tiki theme.

“When tiki started in 1934, it was the hippest, sexiest thing that was happening,” Harjo told Seattle Eater. Harjo confirms that Hotel Albatross is set to feel “as chic as the tiki trend did in Hollywood’s golden age”.

In terms of drinks, the new watering hole is set to feature fruity options including punches and daiquiris. The establishment is also set to feature a smaller bar at the front of the building with a “European café vibe.”

In terms of the menu, Hotel Albatross is sure to please local foodies interested in sampling street food fare. Inside Hotel Albatross, patrons are set to enjoy tortas, tamales, totchos, and skewers. In addition to the restaurant style menu served inside, a walk-up take out window called “Sexy Alley Puffy Tacos” will serve up delicious tacos to passers by on Market St.

Hours for both the bar and walk-up window are still being determined at this stage. The My Ballard team will update this story with the Hotel Albatross business hours when they are finalized.