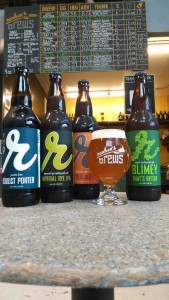 The team at Reuben’s Brews (5010 14th Ave NW) is ready to reveal their new, larger brewery and tap room this Saturday, May 9.

The grand opening celebrations will include special beers from the cellar, complimentary Reuben’s Brews bottle openers for the first 100 people, brewery tours and more.

Food wise, attendees will be able to sample delicacies from the Burgerphenia food truck.

“We’re really excited to show people the new brewery!” said Adam Robbings, co-founder and head brewer of Reuben’s Brews. “We’ve aimed to make the new taproom really comfortable but still open to the wonders of the brewing space. We are excited to brew more styles, add to our line-up with sours and lagers, and expand our barrel-aging program.”

The new 4,000 square-foot space, which is located two blocks south of the existing brewery, is set to feature a 15-barrel brewhouse, 30-barrel fermenters and a larger taproom with 24 taps, an outside deck, more seating, and a 10-foot video screen for showing Sounders and Seahawks games and other major sports events.

The new tap room will also be open seven days a week. Hours will be Monday – Wednesday from 3 p.m. to 9 p.m., and Thursday – Sunday from noon to 9 p.m.

Tomorrow’s opening event will mark a major milestone for Reuben’s Brews. Since opening in August 2012, they reached brewing capacity within six months and started searching for expansion spaces two years ago – in May 2013.

After a long, arduous search for a suitable space they signed their lease for the new brewery in August 2014. In January 2015, the team signed with Click Wholesale Distribution in anticipation of the new brewery coming online to help make their brews more widely available.

The existing Reuben’s tap room will continue to operate on its regular schedule through March 8.