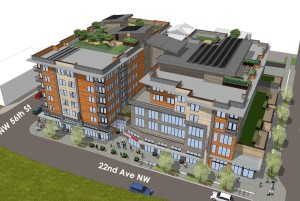 Construction is clearly underway on the new development, called “The Commons at Ballard,” at the site that was formerly occupied by Bartell’s at NW 56th St and 22nd Ave NW.

According to a report by the Puget Sound Business Journal, the project is first in the development area for Seattle real estate company Henbart that was founded in the 1920s.

The developer believes, according to the report, that the project is one of the first of its kind in Seattle to be pre-certified as a super sustainable project by the U.S. Green Building Council.

According to Henbart President Mark Craig, Bartell’s has leased a majority of the retail space.

As many readers are aware office space is considerably tough to find in comparison to new apartments. According to the PSBJ, while only three percent of the office space is vacant, the number of apartments has doubled to 2,560 in just the last two and a half years.

“We are certainly aware of the amount of [apartments] being delivered in Ballard, but we feel that through our amenities, our location, sustainability and connectivity of uses we can offer a unique experience [that] will lead to a successful project,” Craig told the PSBJ.

The Commons at Ballard is set to be completed by summer 2016 and will offer residents and business owners amenities including a rooftop lounge, an outdoor barbecue on the five-story building, and a gas fire pit on the six-story south building. There also will be bicycle lockers on offer for both residents and office tenants on each floor.

According to the report, with just a total of 22,000 square feet on two floors, the Commons at Ballard office space “isn’t designed for mature companies.”

The Commons at Ballard is being designed by Seattle architecture firm Studio Meng Strazza and is the first Seattle mixed-use project to be pre-certified LEED Platinum.

According to the PSBJ, the building is predicted to use 35 percent less energy than a traditional building.