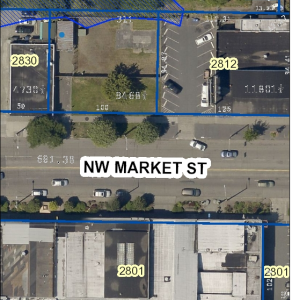 Two city-owned properties in Ballard have been identified as encampment sites for homeless individuals. One site is known as the “Market Substation” at 2826 NW Market Street, designated immediately for approximately 52 residents. The other is 8030 15th Avenue NW, identified as a possible future site for approximately 36 residents. Mayor Ed Murray released a map of the city-owned properties identified for homeless encampments on Monday; today he goes to Seattle City Council for a resolution. Combined with the other sites around Seattle, the city expects to provide space for approximately 200 homeless individuals.

“Permitted encampments are not a permanent solution to the crisis of homelessness we are experiencing in Seattle,” Murray said in a statement. “These encampments will provide a safer community environment than sleeping under a highway overpass or on a park bench. Residents will have improved access to services and we hope to open the door to permanent housing as quickly as we can.”

According to the city, the mayor proposed and the Seattle City Council unanimously adopted an ordinance to allow up to three permitted encampments on each city-owned or private property for one year, with the possibility of renewal. However, each site must be vacant for one year between encampments.

The designated sites were chosen after the Seattle Department of Planning and Development reviewed 135 vacant city-owned parcels. According to a statement, the city estimates that initial start-up costs for the encampments will be $32,000, with annual lease costs and services for encampment residents of approximately $200,000 already provided in the 2015 budget.

Each encampment will be operated by SHARE, Nickelsville, or prequalified faith-based or non-profit organizations. The operators are responsible for safety and security within the camp and residents will be screened by the operators for acceptance. The city says a third organization, Low Income Housing Institute, will provide case management services to individuals living in the encampments. Operators will also form a Community Advisory Committee to respond to community concerns, review operations standards, and work with neighbors when encampments move to new permitted sites.

For more information from the Human Services Department about the encampment sites, click here.