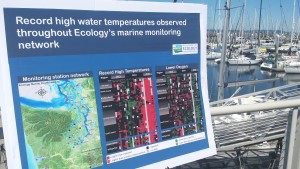 Scientists gathered at Shilshole Bay Marina (7001 Seaview Ave NW) in July to discuss their concerns about the ecological effects of the unusually warm conditions in the Puget Sound region this summer. University of Washington’s Principal Oceanographer & NANOOS Executive Director Jan Newton says concerns are still valid a month after the initial advisory.

She encourages citizens to monitor environmental data with the help of a climatology app user guide that was released online today.

Scientists have been saying that Puget Sound is warmer than it should be, with increased temperatures being the warmest on record for the past 25 years. Research shows that rivers like the Snoqualmie have paralleled this trend at record low flows this summer.

The region’s unusual conditions are a product of a meager snowpack, the 2015 drought, and “the Blob” of warm North Pacific Ocean water off the West Coast.

Meanwhile, in the inland waters of Washington– in places such as Hood Canal– a four degree spike is cutting dissolved oxygen levels to record low levels that are not capable of sustaining marine life.

Deaths of salmon and other fish have led to concerns about the long-term impact on the food web, said National Oceanic and Atmospheric Administration (NOAA) Fisheries scientist Correigh Greene.

Scientists are reluctant to place blame on climate change itself. Instead this year’s variable data is seen as a preview for what climate change in the years to come could look like.

The public can track the region’s oxygen levels here or visit http://www.nanoos.org/ to find information on the Blob and further the climatology, of which Newton speaks recommends. It is Newton and her team’s hope that the user guide will make the app more easily accessed by the public.

By comparing results of the last two months, viewers can see two major changes that have occurred since July. The coast monthly average sea surface temperature in July, like in June, was warmer than average indicating variable upwelling. Further, the hypoxic layer at Hoodsport has become even thinner than it was, but it is still there, according to the ORCA advisory.

Both the temperatures and lack of oxygen are signs for stress to organisms. “In very severe conditions, we’re concerned about fish kills,” Newton said in July. Monitored results of this last month show that the danger of fish kills remains as much, if not more, present than it was earlier this summer.

“This weekend could be interesting for South Hood Canal because strong Southern winds are forecast on Saturday,” says Newton. “This could result in fish kills, or we may dodge the bullet if the winds don’t blow that long.”