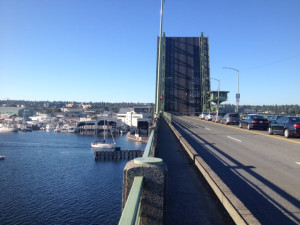 Seattle’s Department of Transportation is asking for public input on whether to petition the US Coast Guard for changes to the Ship Canal bridges opening rules. The bridges operated by the city are Ballard, Fremont, and University.

Currently, the city operates the bridges but the Coast Guard has regulatory authority over when and how often they open. While the city successfully petitioned to have the bridges closed during the rush hour commutes in the morning and evening (7-9 a.m. and 4-6 p.m.) they plan to seek extended closures in order to better facilitate the flow of traffic. But before they submit a proposal to the Coast Guard, the city wants public input.

SDOT says the average bridge opening lasts about five minutes, which can cause hundreds of vehicles to back up if it opens during rush hour (the bridge still must open during the rush hour closure for large commercial vessels). “Buses run behind schedule, commuters find that it takes longer to get to work or back home, and many delayed drivers leave their motors running, spewing polluting emissions into the atmosphere,” SDOT says.

The city is asking interested citizens to share their thoughts with SDOT about whether expanded restrictions are warranted, and what they might look like. SDOT asks that people register their comments by Wednesday, September 30, as they hope to submit an application by November 1, 2015.

Comments can be filed via email at ShipCanalBridgeOpenings@seattle.gov or via US Mail to:

More info about the bridges and additional statistics, click here.