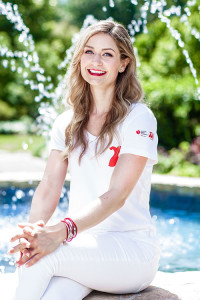 Ballard resident Emily Welbourn has been chosen as a national ambassador for the Go Red For Women campaign by the American Heart Association.

Welbourn was running a 3.5 mile race and in the best shape of her life when she suffered a after suffering a cryptogenic stroke at the young age of 27.

During the race she felt a stabbing pain above her right eyebrow that continued to spread over the top of her head. She brushed it off as dehydration and finished the race although she felt light headed.

After the race others noticed that her face was drooping and took her straight to the medical tent. Welbourn was then taken to the hospital and received a clot-busting drug less than three hours after the onset of her symptoms.

Welbourn learned first-hand that, as she says, “time is the number one factor in reducing death and disability caused by stroke.”

In terms of recovery, it took weeks before she could walk beyond short distances, and months before she could manage two things at once. In spite of left-side numbness and constantly rebuilding her short-term memory, Welbourn’s hard work paid off. 11 months later, she completed a half-marathon, followed by the Boston Marathon in 2015.

Welbourn has made amazing progress in her recovery and through her position as ambassador she is encouraging others to listen to their body for signs that something may be wrong.

“It has been important for me to remember I survived, and I am now leading this second life as fully as I can,” she says.

She now encourages women to seek help when something doesn’t seem right, rather than brushing it aside. “We must take care of ourselves so that we can be around for those in our lives that we love,” says Welbourn.

Welbourn’s stroke was cryptogenic, meaning of an unknown, definite cause. According to the American Heart Association, stroke is the fifth-leading killer of Americans, and a leading cause of adult disability; about 30% of strokes are cryptogenic.

February is also American Heart Month and this Friday, February 5, in National Wear Red Day during which the American Heart Association encourages all Americans (newborns included) to wear red in support of the fight against heart disease and congenital heart defects.

In celebration of National Wear Red Day, all newborn babies born at Swedish Ballard this month will be receiving red hats lovingly knitted by volunteers participating in the Little Hats, Big Hearts™ program.