Crews are at work this week to continue construction on the Ballard Neighborhood Greenway and some traffic restrictions will be soon in place at the intersection of 17th Ave NW and NW Market St.

Pavement markings and signage are being installed this week that, once operational, will no longer allow vehicles to travel straight through the intersection (see image below). 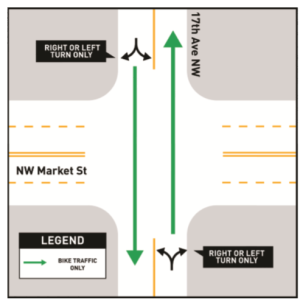 The work was originally planned for December last year, however wet weather caused the work to be rescheduled.

According to SDOT, the restrictions are being imposed due to the concerns about the volume and speed of vehicles traveling along 17th Ave NW that were expressed during the design of the Ballard Neighborhood Greenway.

SDOT released a press release stating that changes “will not only reduce cut-through traffic on the greenway, but will also improve safety and help preserve the residential character of the neighborhood.”

Construction is also in progress on other sections of the Ballard Greenway this month with crews completing the curb ramp installation at the intersection of NW Dock Pl and Leary Ave NW.

Access to NW Dock Pl from Leary Ave NW is now open on both the north and south sides of the intersection. The southwest corner of the intersection is still under construction. Crews were required to dig up the sidewalk to place additional electrical wiring for the crossing signal.

While work is being completed on this corner, the sidewalk will remain closed. Temporary pedestrian paths and American with Disabilities Act (ADA) ramps around the closed sidewalk portion will remain in place until the work is completed this month.

Crews are also set to install an enhanced pedestrian/bicycle signal on Leary Ave NW within the next few weeks. Once the sign is installed vehicles traveling on the greenway at NW Dock Pl will be controlled by a stop sign.

The traffic signal will stay predominantly green for vehicles traveling along Leary Ave NW but will change when triggered by a vehicle, pedestrian or bike waiting to cross on NW Dock Pl. The crosswalks and other pavement striping require dry weather for installation and will be installed by SDOT crews as soon as possible. 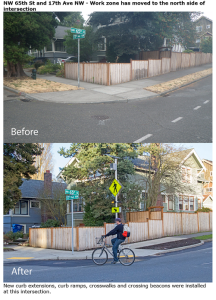 In addition to the construction detailed above, SDOT confirms that the following elements of the Ballard Greenway are now complete:

Click here to view more photos of the project elements that have been completed so far.

Photo and image courtesy of SDOT.