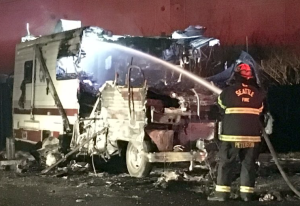 SFD crews responded to fire at a temporary RV camp in Interbay at about 4:30 a.m. this morning.

The SFD confirmed that the fire was caused by cooking stove fuel being spilled near a heater and that two adults were taken to Harborview Medical Center with burns. Our news partners at The Seattle Times reported the injured as being a man and woman in their 30s.

This mornings RV fire in Ballard was caused by cooking stove fuel accidentally spilled near portable heater. 2 adults to HMC with burns.

Harborview spokeswoman Susan Gregg told The Seattle Times that the woman was in serious condition in the intensive-care unit. The man was reported to be in a satisfactory condition.

The fire occurred in the Interbay lot (W Armory Way at 15th W) that was opened as an interim location for RV residents who will move to one of the two “safe lots” to be opened under Mayor Ed Murray’s emergency order on homelessness here in Ballard or in Delridge.

The Ballard “safe lot” will hold an estimated 50 vehicles and will be opened on land owned by Seattle Public Utilities at the old Yankee Diner parking lot (Shilshole and 24th Ave). The City is aiming to have the lot open by the end of February.

Interbay lot resident Clayton Lewis, who lives near the RV that went into flames, told The Seattle Times that he heard a loud boom and thought at first that a nearby wall has toppled over.

“I saw sheets of paper on fire in the street. Smoke was filling up,” Lewis told The Seattle times, referring to his RV.

Another resident, Jarrett Shickling told The Seattle Times that he heard his neighbors screaming. “That could have brought mine down, my RV. These things go up like tinder boxes,” said Shickling.

Both Lewis and Shickling told The Seattle Times that they were concerned about the effect this fire would have on the future of the temporary camp.

Photo courtesy of The Seattle Times.