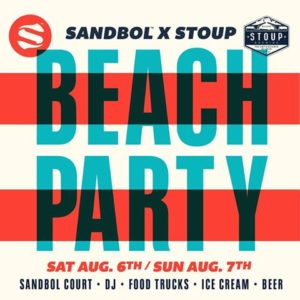 Stoup Brewing (1108 NW 52nd St) is teaming up with Sandbol to host a beach party at Stoup’s tap room and beer garden this Saturday, August 6, and Sunday, August 7.

Sand will be brought in to fill a 12’ x 35’ court for Sandbol play, along with a DJ spinning, food trucks, ice cream and swag prizes for lucky winners.

Sandbol is a new to-the-world beach game started by Ballard resident, Mitch Tennison. He describes the game as “cornhole meets bocce ball meets horseshoes” designed with the sand in mind.

“I saw an opportunity to design a game that could leverage the uneven terrain of sandy beaches, be highly portable and bring people together,” says Tennison.

Tennison’s goal is to raise awareness and gain excitement around the gaming prototypes before officially launching the product next summer.

In addition to the aforementioned treats, expect to find Napkin Friends out front on Saturday, Anchor End Pretzel Shoppe on Sunday and ice cream from Balleywood Creamery on both afternoons.