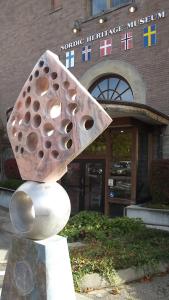 The comment period for the reopening of Webster School has been extended to September 21, after a well-attended public meeting hosted by Seattle Public Schools. (My Ballard had incorrectly reported that the meeting was hosted by community member Chris Jackins).

Seattle Public Schools presented the project details at Tuesday’s meeting, which, according to Thomas Redman with SPS, was attended by 50 community members. “Overall, everyone was supportive of Webster becoming a school again, but concerns over parking and traffic were brought up by many; difficult problems in our urban city. We will address all concerns during the course of the project,” Redman told My Ballard.

During the meeting, SPS, the architect, SEPA consultant, traffic engineer and contractor presented sections of the draft SEPA. SPS has chosen to extend the opportunity for comment to September 21. To comment, email SEPAcomments@seattleschools.org.