After calling for volunteers to help move, Nickelsville decides to stay for now – My Ballard Skip to main content 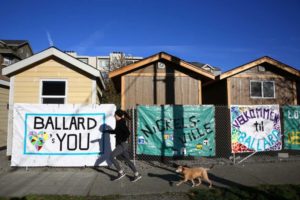 Earlier: Nickelsville’s two-year stay in Ballard is officially up on Saturday, and the city has told organizers that residents can stay in the camp until the new site in Northlake is ready next month.

But despite this assurance, Nickelsville was calling for volunteers to help them pack up and move today. Last night, they called off the move after an “emergency meeting.” Writes Nickelsville’s Scott Morrow on Facebook:

This evening, shortly after receipt of a letter from Councilpersons O’Brien, Juarez, Sawant, Harris-Talley and Johnson, the Ballard Nickelodeons held an emergency meeting. They considered this letter, the vote Wednesday of the City Council Budget Committee to fund two additional sanctioned encampments, and the urging Monday of the Ballard Alliance (formerly the Ballard Chamber of Commerce) to stay on Market Street.

With the expectation that Seattle Human Services Department leadership will respect the wisdom of the Majority of the Seattle City Council, Ballard Nickelodeons unanimously voted to suspend their move and remain at their present location.

In many ways this is a terrific resolution to a difficult challenge. We are in awe of the love and solidarity from so many that made this step possible.

George Scarola, Seattle’s Director of Homelessness, said Nickelsville has been granted an extended stay in Ballard until the Northlake site is ready in mid-December. In an earlier community meeting, camp residents were concerned that staying would break their promise with the neighborhood.

Actually, they’ve been good neighbors (I live a block-1/4 away). I also shudder to think of what will happen to the vacant land when they leave unless City Light puts an impervious fence around it. Which is worse?

And just why can’t they stay until we have helped to provide a permanent solution with real plumbing and a real home. These are our neighbors, people who have chosen to live in our community. They are our responsibility and we should take pride, as a community in seeing that our neighbors are treated with dignity.

Not our responsibility. These are grown adults. Adults who made poor choices.

My daughters shool is three blocks away

they routinely find needles on the playground.

What the f is wrong with this city?

Stan Shaufler – I choose to live in Laurelhurst in my tent. Please tell them to let me live in their community!

And yes, it was complete political theater, put on once again by that award-winning troupe, The Scott Morrow Players.

My son and I live less than 2 blocks away from Nickelsville. I’m wondering why move this group of people at all? Providing shelter seems like the best use this land has been tasked with for over a decade. I think the spot up North could be used to house another group of people. At the very least our neighbors and fellow Washingtonians deserve a roof over their heads this winter.

My family lives a couple blocks away and was not for this temporary site. But I can’t believe it’s been two years, and honestly, these people have been unobtrusive neighbors. The ones that need to go are the criminal, drug addict campers in all the unsanctioned encampments around our neighborhood. They’re big trouble and all need to be driven out now. Nickelsville was OK.

It’s been a fun-filled 2 years with a the massive increase in theft, strong arm robberies, heroin use in the parks featuring library perma-loitering, and raving lunatics harassing people on Market Street. Personally I’ve enjoyed the “narcotics diversity” and I’m sure the service workers at the shops and grocery stores appreciate the assaults, burglaries, and thefts from locked cars.

We’re just one more tax away from ending poverty! That’s right, here in Seattle we can stop capitalism dead in it’s tracks by ordering everything from massive corporations like Amazon and voting to fill up our green spaces with tweakers! Resist!

Thanks to the City Council, limousine liberal Boomer hippies, guilt ridden millennial trust funders, and assorted other misguided fools who’ve managed to screw up even the one upside to gentrification: reduced crime.

You must all really love the sounds of sirens.

Do you have any sources for this sort of data? I live two or three blocks away, from Nickelsville, and have noticed a _decrease_ in a lot of the negative stuff I had grown to expect from the homeless population in the last couple of years. Seriously, the crazies in the park, at the grocery store, and suffering psychotic breaks in the alley behind my house and on Market (half a block over), are not new. I can’t say the same for the when the city created an “RV safe lot” off of Shilshole, at which point I had a propane tank stolen from my back yard, and shortly after my car broken into. I link both to the RV lot because of timing and the detail of the propane tank, but I could be wrong. I suspect that the screened residents of Nickelsville are far less of a risk to the area than the already present homeless population, and the even sketchier RV/van dwellers. I ask about sources for metrics because my own personal experience is just one sample. The decrease I’ve noticed could well be because certain, loud individuals are no longer part of the equation; which doesn’t… Read more »

I find it truly amazing that this kind of view can still exist in an educated town.

What in the hell ever happened to “tough love”? Can anybody tell the rest of us what the “exit strategy” is here? All this money being spent isn’t working and is only attracting more of these folks. As in encouraging/embolden them. Is our oh so well intended city clownsils next move building pigeon nests on the Ballard bridge, and why not?

Rural rednecks are “deplorables”, therefore we must virtue signal at every opportunity and shame reasonable people as “uneducated, ingnorant NIMBYs” if they don’t celebrate turning Ballard into Belltown. The kicker is, these Social Justice types seem okay with filling the city up with deplorable tweakers in their misguided attempt to Resist Trump!

Wake up, People. We had a pedophile mayor who was probably known as a pervert for years to members of the City Government. There was little outrage, only more partisan bashing and a proposal for a city income tax.
The cartoon “South Park” could not do better parody than Seattle does of itself.

This “homeless crisis” is the result of under policing and insane liberal ACLU lawyers who’d rather sue on behalf of dead rapists and heroin dealers than see a once fine city remain livable for its citizens – not to mention the countless “nonprofits” who scam millions from taxpayers via failed policy after failed policy.

Be sure to quote some piece from NPR and keep that head buried in your phone when the junkies hassle your loved ones.

@access hollywood So, you have no actual facts to contribute. @scott I think you have a point, though I’d look at Nickelsville and the random homeless as separate categories. I think the residents of Nickelsville are screened and required to follow rules and guidelines, but it’s not clear to me if that is part of a broader plan (i.e. job training and transition into regular society) or if they are just allowed to float at that level. If it’s the latter, we’re just removing the motivation to become fully functional instead of being truly helpful. Unfortunately, I get the feeling from the report made last year by some outside experts that it _is_ the latter. i.e. It’s a (relatively) clean facade on the problem that doesn’t work towards long term improvement. The free-for-all tent cities are just an all-around bad idea. While Nickelsville discourages non-residents from hanging around the area, the tent-cities are a magnet for all the negative aspects of homelessness, and just reinforce them. Granted, I don’t think these are city-supported, but it seems like they are tolerated until there’s a murder or two. Hopefully, city and charitable resources will be focused on the recommendations from the experts.… Read more »