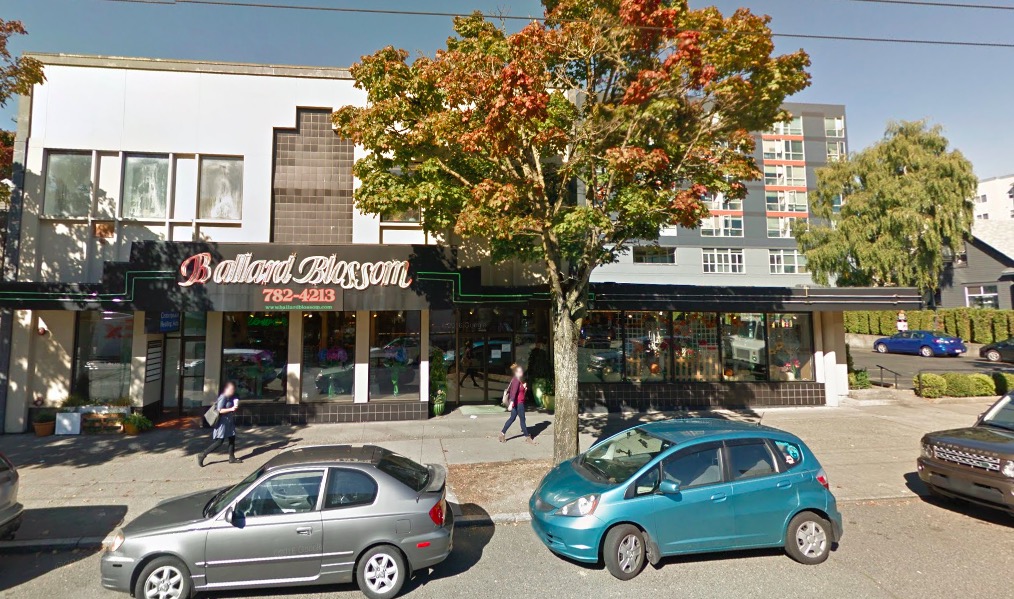 The location of one of Ballard’s most well-known businesses, Ballard Blossom on Market St., may become the home of a 7-story hotel.

David and Rachel Martin own Ballard Blossom, and Rachel told us that there are “serious talks” underway, but there’s no deal as of yet. She said she was surprised to hear about a land use proposal that was filed, which also sparked a short story by the Daily Journal of Commerce.

“There’s nothing signed, sealed and done,” she said, adding that they’ve seen tremendous interest from potential buyers over the last few years. “There’s nothing final.”

The land use filing proposes a hotel with 6 floors of “vibrant, upscale guest rooms” and an “amenity-filled ground floor” with three floors of below grade parking.

Martin said that if the deal did happen, they would certainly keep Ballard Blossom in business and open in a new location. “We’re playing with a lot of ideas,” she said, which includes opening a smaller place in Ballard and locating a larger production facility elsewhere.

Billed as the Northwest’s largest florist, Ballard Blossom opened in 1927 and moved to its current location in 1984. David Martin took over the family business from his grandfather.

Earlier this year, there was a proposal for the Market St. building to become a Seattle landmark, but it failed to be nominated, according to the Landmarks Preservation Board.

I get nose bleeds in anything taller than a craftsman.

With such an affliction you might do better in the suburbs.

I will leave Ballard if this happens….. Sell out, Ballard!!!!

Too late Margo, Ballard sold out several years ago

Yes, we really should never have paved the streets.

There is nothing sacred about bungalows. They replaced forests and other houses. Life moves on.

I left when they pushed out the last Ballard shingle factory and whore house!

Read this for some perspective if you think your life is ruined by a flower shop moving by a block or two:

why do you think it’s so bad if there’s a hotel? You don’t think visitors and tourists should be in Ballard? Why not?

If Ballard Blossom were being run out of business, that would be sad, but it sounds like they’ll be fine. I just don’t get why this is a bad thing.

“why do you think it’s so bad if there’s a hotel?”

We’ll, use original Ballardites know what really goes on in “hotels”.