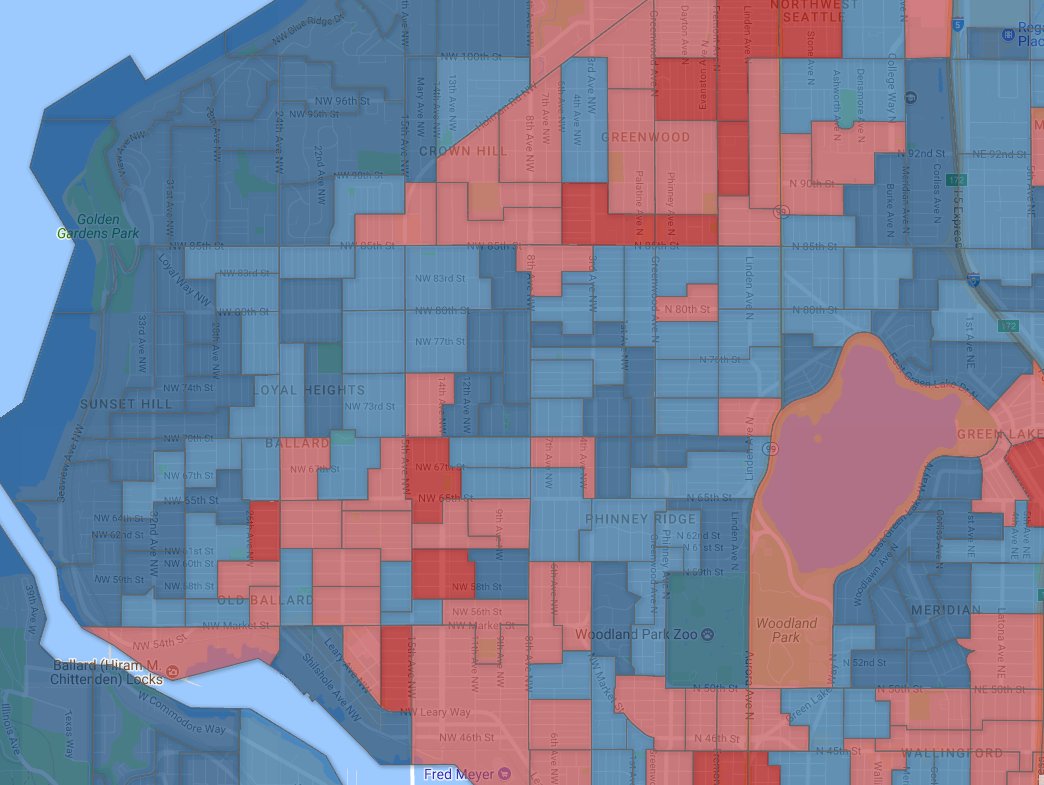 With the election count finalized, Phil Gardner plotted the data on detailed maps that illustrate how different neighborhoods — down to small sections of neighborhoods — voted for mayor.

This is the Ballard area map above (you can browse the interactive version here), with Jenny Durkan in blue and Cary Moon in red. While Ballard’s core and Crown Hill leaned for Moon, Loyal Heights, Whittier Heights, Sunset Hill and North Beach went for Durkan.

This pattern repeats itself throughout the city; more urban areas tended to vote for Moon, while neighborhoods like Magnolia and Queen Anne were firmly in Durkan’s column.

Voting here today is a joke. The deck is stacked. The replacements are all here and voting correct now too. WTF happened to all this “diversity” I incessantly hear about? All I see is a mono-culture chock full of mind numbed hipsters who don’t know what they don’t know. All having been “conditioned” and so wanting to conform. Bend over and grab your ankles for me today would U.

@Scott: Rather than whining on a blog, why don’t you start an initiative to change Seattle to an instant runoff voting system, rather than our current primary, followed by first-past-the-post voting system?

@TRUTH: Because Scott has no idea what you just suggested!

Well, this map certainly explains why Ballard tolerates the open-air-free-range loony bin approach to the homeless junkies and rubber stamps mindless tax increases that hurt the renters and service workers.

Their preferred candidates are only slightly saner than O’Brien’s favorite citizens.

There was no centrist candidate to vote for, and that is unfortunate, because it’s what we need now more than ever. Moon and Durkan are the same and had to search for differentiation to pull voters. We need centrists who will realign policy to the needs of the law-abiding, productive majority at all levels in our government so badly. The things that out government has done and is doing here are the kinds of things that make “liberal” a pejorative and enable election of people like our current President.

“law-abiding, productive majority at all levels in our government so badly”

Don’t you mean the oppressor class?

@ TRUTH There already is a petition circulating for a Seattle Charter Amendment, CA-27, which would provide for instant runoff voting in Seattle elections. More info at fairvotewa dot org.