Volterra is closing on New Years Eve, searching for new home in Ballard area – My Ballard Skip to main content 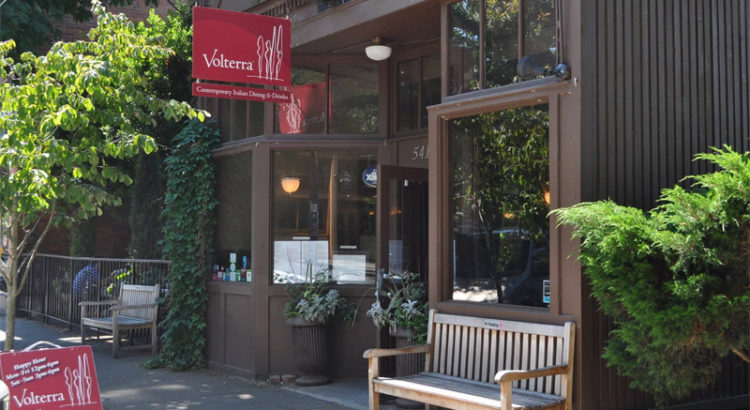 One of Ballard’s most beloved restaurants is closing. But only temporarily.

“Our building is being sold,” Volterra co-owner Michelle Quisenberry told My Ballard. “We are actively looking for a new Ballard-area home.”

Volterra’s last night will be New Years Eve, and every night until then, co-owner and chef Don Curtiss will be cooking.

“Please pop in to say hello and sign our legacy photo of Ballard Avenue that we’ll hang in the new location,” Michelle and Don explain in a note to customers. “We’ve enjoyed watching Ballard Avenue and the surrounding community grow and thrive which is why we are excited to continue the Volterra legacy in a new Seattle home.”

Volterra opened in Ballard 13 years ago in a prime location on Ballard Ave., and it’s received a variety of acclaim for its food, drinks and service. Rachael Ray even stopped by in 2008 to film an episode there. Michelle and Don opened another Volterra restaurant in Kirkland in 2012.

In an interview in Eater in 2015, Michelle looked back at 10 years in the neighborhood.

“We were really one of the anchor restaurants on Ballard Avenue, there was us and some of the old favorites like Bad Albert,” she said. “We were really the first kind of finer dining restaurant to make its way to Ballard. Over the past 10 years it’s been amazing to see the growth and now there’s, I can’t even remember, I think there’s a hundred restaurants in that area. So, it’s becoming extremely popular and to watch the neighborhood transform has been really exciting.”

While Volterra moves to a new location, Michelle and Don invite their Ballard customers to join them at Volterra Kirkland. “You’ll find the same menu and warm service that you’ve enjoyed in Ballard,” they write.

(This story originated from a post in the My Ballard Facebook Group, which any current or former Ballard residents can join.)

Volterra, please move into the vacant Anthony’s on Seaview Ave NW !!! Perfect spot for you !!