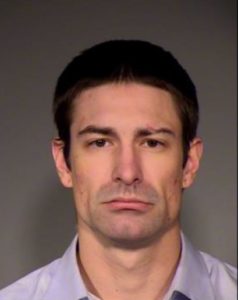 The man who barely survived a vicious attack last November is enduring a difficult recovery, and doctors told him he’s fortunate to have lived through it.

Kasey Busch was doused with gasoline and lit on fire at 4500 Leary Way on the night of November 7th. He talked to KOMO TV last night, his first interview since the attack.

“He said, ‘what’s up,’ threw a Big Gulp cup of gasoline on me and, I’m like standing there thinking, ‘what the (*expletive*) is going on?” said Busch.

Seattle Police have identified the suspect as 31-year-old Christopher Burrus (pictured), a man who is known to frequent the Ballard area. Busch told KOMO TV he had a heated argument over stolen tools with Burrus’ ex-girlfriend.

Doctors told Busch that he flat-lined in the ambulance on the way to the hospital, and his burns were so severe, only 5% of patients typically survive them.

Burrus is still at large. If you happen to see him in the neighborhood, call 911. If you have information about the case, contact the Seattle Police Homicide Hotline at 206-233-5000.

Nothing to see here, Ballard – just an arsonist murderer lurking in the neighborhood. He’s probably living in an RV and loitering around Commons Park or the library. If I recall correctly the eyewitnesses remarked that they were saddened – but not surprised – something like this happened because of the amount of drug/psychopath crime in the Frelard industrial area.

“a man who is known to frequent the Ballard area.”

Or as Mike “Wokey” O’Brien would call him, “one of my houseless neighbors”

Someone with that very same, not exactly common name coincidentally worked at an office just a few blocks from the crime scene. That person appears to be same age, hair color and general appearance as suspect and was a university grad with a stable work history so doubt they were transient/living in a RV.

Suspect has a sad face.

This suspect changes his facial expression and wears a beard at times, which dramatically alters his appearance.

I’d be curious to hear what Access Hollywood’s alibi was at the time. He’s so quick to blame the homeless for crimes that have no indication of being perpetrated by the homeless. Maybe he’s trying desperately to cover up his crime spree? 🤔

The worst kind you can have in Seattle: he has a job, pays his taxes and doesn’t yell obscenities in the park at strangers in the middle of the day.

When you’re over the target, so to speak, you always stark taking flack – or in this case ad hominem attacks and then outright character assaults and insinuations. The tactics never change:

libel
1) n. to publish in print (including pictures), writing or broadcast through radio, television or film, an unTRUTH about another which will do harm to that person or his/her reputation, by tending to bring the target into ridicule, hatred, scorn or contempt of others. Libel is the written or broadcast form of defamation, distinguished from slander, which is oral defamation. It is a tort (civil wrong) making the person or entity (like a newspaper, magazine or political organization) open to a lawsuit for damages by the person who can prove the statement about him/her was a lie.

@Access: If there’s no substance to your comments and they are nothing more than a moronic jab at an issue that you offer nothing towards, then the only thing left is to mock the idiot who made the comment in the first place.

And libel? You keep using that word. I do not think it means what you think it means. You snowflakes are all about posting stupid trolly garbage, but the second anyone questions your idiocracy, you start crying and claim OMG TEH LIBELZ!!111 Who are you, President Trump?

@Fart: I’d love to have his job, where he can sit around and comment against homeless people on neighborhood blog comment sections all day and get paid for it!

How come this fire attack happen?