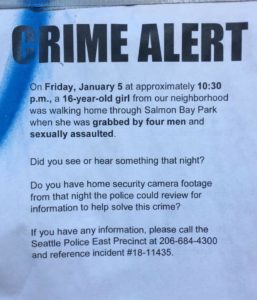 A photo of a “crime alert” flyer posted at Salmon Bay Park has been shared on the My Ballard Facebook Group — and emailed to us here — and we called Seattle Police for the details.

SPD Detective Mark Jamieson says they received a report on January 10th about a sexual assault that occurred in the park on the night of January 5th. The case has been assigned to a detective in the sexual assault unit, but it’s too early in the investigation for police to confirm what happened.

The anonymous flyer, which was not posted by the police, says a 16 year-old girl was walking through Salmon Bay Park at approximately 10:30 p.m. on January 5th when she was “grabbed by four men and sexually assaulted.” It asks that neighbors call police if they have any information or security camera video.

The flyer lists the East Precinct phone number, but Jamieson said the correct contact is the SPD sexual assault unit at 206-684-5575. The incident number in the case is #18-11435.

Jamieson said that police will update the neighborhood if they believe there’s a public safety threat. Salmon Bay Park is located in Loyal Heights between 19th and 21st Ave. NW at 70th St.

We’ll keep you updated, and thanks to everyone who sent us a tip.

“Jamieson said that police will update the neighborhood if they believe there’s a public safety threat.”

WTF does it take to qualify? I’d have thought a 16-year old girl being assaulted by four men in a public park would move the needle a bit in that direction! SMDH

We live in Loyal Heights fairly close to the community center. On Saturday, Jan 6th at 5 PM a young girl pounded on our door scared to death. She said was out for a run but was walking when she passed a man. There was another man coming the opposite direction. As soon as she passed the first, two men said something to each other and suddenly started chasing her. She sprinted down our street and happened to see our TV on through the window. She said she had out run them – that they gave up after they couldn’t keep up. The police where here within 15 minutes of her calling 911. The looked around but didn’t see the two men. She was obviously frightened and our street is dark so she did not get a good look at them. Maybe these are related?

Gang rapes in our parks now.

Can someone yell to Mike O’Brien to get out of his kayak and come do something for his constituents?

Jessica, can you please forward that information to Officer Cruzan on the Community Police Team, in case there’s any possibility of connection? SPD is under-staffed and any tips for considering linking of case numbers (if one was even assigned) might be helpful. He will be able to connect it to the detective in charge of the sexual assault case. Thank you so much for helping the girl.

Jessica, can you contact the Community Police Team to make sure they connect this info with the Salmon Bay Park investigation, in case there is any connection? Officer Michael Cruzan (206) 233-3733, (Michael.Cruzan at seattle dot gov)

Thank you for helping the girl. How frightening for her.

Couldn’t possibly be all the homeless and drug addicts who Mike O’Brien invited into our community that hang out in this park every night?

I’m so sorry for what this girl has experienced, but SPD Sexual Assault Unit will not investigate. My wife was drugged and raped by 2 men – 1 living 4 blocks from this park. They refused to investigate because she knew 1 of her attackers and he had only attacked once. Although there were multiple other women he had assaulted – even the school principal had received a complaint. How many victims does it take SPD?

The cItY cLoWnCiL and Mayor want to ban licensed CPL holders from protecting ourselves in our own parks from the criminals they let run amok there.

Good to know we have a group of gang rapists on the loose on the neighborhood and the police didn’t tell anyone.

Instead of implementing a massive crackdown on felon hobos and their camps, the city is currently pursuing a (additional? overlapping?) smoking ban in city parks and stadiums. Think about this.

The city’s priorities are something from Terry Gilliam’s “Brazil”.

Is there a Seattle Guardian Angels chapter? We should get a Ballard chapter started.

As the grandmother of a 14 year old girl in this neighborhood I’m very much hoping to see
local adults, especially parents, organize and take shifts patrolling the neighborhood, especially the parks.

I basically live at that park. I just checked my phone messages on that day to get an idea of where I was at the time and unfortunately I was out at the time. It would be helpful if anyone had any information as to where in the park the assault occurred? If the girl’s parents had some way to contact me with some more information about time, place, and more detailed descriptions of the men would also be so helpful. I know a lot of people who pass through the area, so any information helps. I know some neighborhood kids all the way up to local homeless guys who come around. I had no idea about all the various crimes in the neighborhood (including those mentioned in the comments), I am upset that nobody tells me these things because I could actually do something about it. This is my first time checking out something on this website and I HAD to comment because this basically happened on my property and I feel responsible for keeping this kind of crime out. If the police aren’t doing anything to help then it seems that I will be required to start hanging… Read more »

Meanwhile, while we have a marauding gang raping children in our parks, our council member, Mike O’Brien, is holding a meeting about the spandex trail. At least he’s out of his kayak. Priorities you know.

Ballard Guardians might not be a bad idea – I think we could get some people together. I don’t see them setup here although they are supposedly in Seattle and there’s a blank Ballard Guardian Angels Facebook page.

“Salmon Bay Security – how do we reach you?”

You will recognize Super Salmon BS by his yellow cape and mask.

Please, we don’t need any vigilante patrols going around scaring young children. If this crime even happened it’s extremely rare in what is one of the safest neighborhoods in the city.

Exactly, we don’t want to upset or disturb the rapists, car thieves, home burglars, package thieves and addicts dropping needles in our parks from merrily living their lives.

By the way, who said vigilante? I’m assuming then you never watch out for your personal safety?

By the way, of the three Amazon “soft boys” I know in Ballard, two are ex-military. One was a marine and served in Afghanistan, the other a Navy helicopter pilot. The last one is gay, but built like a brick sh*t house, so I’d dare you to call him a soft boy.

I have no problem with vigilantes stopping groups of men from gang raping our daughters. Are you pro-gang rape?

Groups of men (soft Amazon boys) with no proper training are going to cause waaay more trouble than contribute to any solution.

“Groups of men (soft Amazon boys) with no proper training are going to cause waaay more trouble than contribute to any solution.”

You should run your theory by the 16 year old victim.

Ballard Angels?
People like Carl can call this “vigilantism” but the fact is when the Guardian Angels started up NYC was, how shall I put it – a sh*thole. If Ballard stood firm against people like O’Brien (Free Ballard amirite?) and formed a counter-squad against the felon hobos 5yrs ago or more we may have been able to influence the elections.

A Ballard Guardians group would send the message to the creeps – and the mayor etc – that the citizens are fed up and willing to be proactive about the safety of their home turf. It’s ours, NOT THEIRS, right?

It’s way overdue but needs to happen. And Carl, not all of us are amazon soy-boys, and hell even those guys have to start somewhere. Maybe if some of the local rags took a few weeks off from obsessing over dog babies, Harry Potter/Star Wars, and trendy nonsense we could get organized and start making a difference.

Blaming the local media for not starting a vigilante group — that’s a new one.