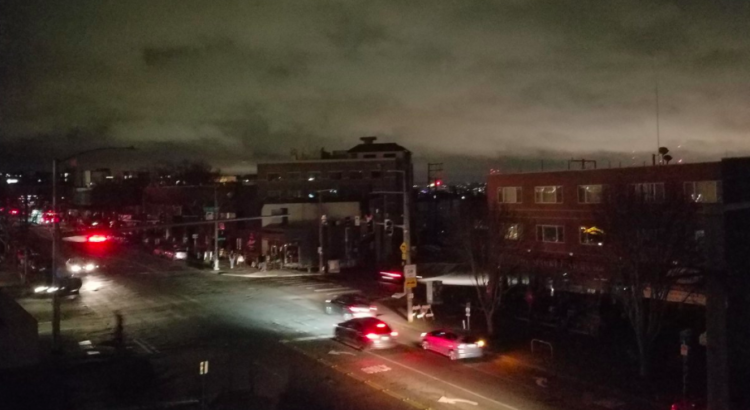 Monday update: We asked City Light if they identified a cause, and it’s not nearly as interesting as that raccoon back in 2016.

“It was caused by a cable fault, which tripped a lockout to the neighborhood feeder,” said City Light’s Tony White. “This isn’t unusual, as there are a number of things which can damage cables. It’s most likely that the sudden failure happened along a splice point.”

Update 7 a.m. All power has been restored overnight.

“The substation that serves the area is our Canal Substation, but the original cause is still under investigation,” City Light told us. “So, the problem may not be in the substation itself.”

That substation is located at 8th Ave. and 46th St. — the same one that was short-circuited by a raccoon in spring of 2016.

City Light also says the total number of customers that lost power in this outage was 12,900.

Update 11:30 p.m. Most of Ballard has been restored, but there are still patches of outages, especially along Seaview and into Sunset Hill. City Light says 559 customers remain without power, and there are another 1,872 customers on the Magnolia side of the Ship Canal.

Update 10:40 p.m.: City Light reports crews have restored power to about 1,200 customers, about a third of the total. Conor Byrne in Old Ballard reports the power is back on there. The estimate for complete restoration is still 12:44 a.m.

Earlier: Seattle City Light reports widespread outages along both sides of the Ship Canal. Much of Old Ballard and Market St. west of 15th Ave. are without power, as well as parts of Sunset Hill. The outage extends into Magnolia along the Ship Canal and parts of Interbay, as well as Seattle Pacific University’s campus.

Shilshole Marina and the Ballard Locks are also dark, according to the My Ballard Facebook Group. Power is also out at the Matador on Market St., as well as several other bars and restaurants in Old Ballard on a busy Friday night.

No, it’s not related to the government shutdown.

(Photo of a dark Market St. courtesy of @mgrass on Twitter.)

Randall J is a complete idiot with a stupid in educated question.

Pesky racoons are at it again!

Fyi, the outage extended to the top of Queen Anne as well. This may have been an earlier map.

My wife told me she heard it was caused by car prowls.

The amount of new development is more than the current capacity can handle. Developers are not required to upgrade any infrastructure, just tap in to what is already there. Now it cannot handle the load. Outages in Ballard used to be rare. Now they are common.

@Josh: I’d be curious of your source. If SCL (and SPU for that matter) is having capacity issues and covering it up, that’s a national security issue and you should go to the news immediately!

Oh what’s that? You were just making a comment on something you know nothing about? Carry on.