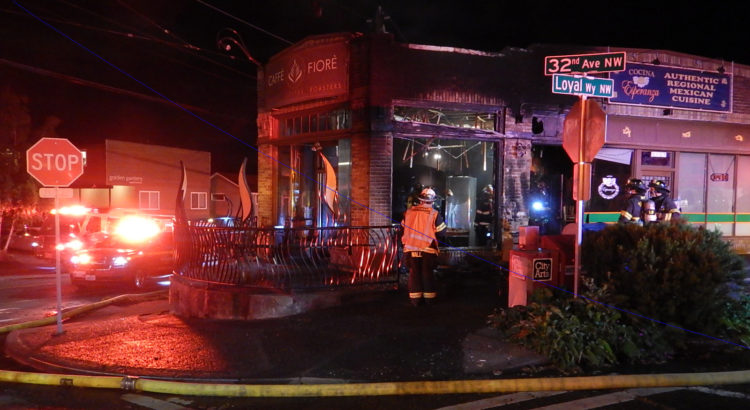 Monday update: Caffe Fiore owner Deming Maclise emailed us this morning and confirmed Fiore — as well as Cocina Esperanza — are coming back.

“After many months of permitting and insurance adjusters we have finally started construction,” he said. “The building will be getting new bricks and windows as well as new electrical and mechanical. Marcos is working in his space to get Cocina Esperanza open and I am designing and starting construction of my Caffe Fiore space. I am very excited to get Caffe Fiore open again – I plan on having many of the staff members back and I’m making some improvements to the space. We are hoping to open sometime in April – at least that is my hope. Looking very forward to being part of the neighborhood again!”

Updated: Six months ago an arsonist lit Caffe Fiore and Cocina Esperanza on fire. Cocina Esperanza owner Marcos Delacadena was inside at the time, but fortunately he was able to escape unharmed and quickly call 911. The fire resulted in an estimated $130,000 in damage.

Seattle Fire later ruled the blaze was intentionally set, determining the cause was “ignition of combustible materials on wooden chairs located on the outside of the building.” There have been no reports of any arrests.

A couple weeks after the fire in late June, Caffe Fiore posted on Facebook that “we plan on reopening in about 4 months… or so.” But as the months go by, we’ve received quite a few requests from Sunset Hill neighbors asking if and when Caffe Fiore and Cocina Esperanza — both very popular in the area — will return after fire.

After a few attempts to contact Caffe Fiore, they responded to us on Facebook today and said they’re hoping to re-open this April.

The building’s owner has yet to respond to us, and we’ve been unsuccessful contacting Marcos Delacadena about the fate of his restaurant. When we last visited the building at NW 85th St. and 31st Ave. a couple weeks ago, there a lot of work left to do. The inside of Fiore (above) has been cleaned, but it doesn’t appear to be ready to reopen anytime soon. But in recent days, scaffolding and plastic have gone up around the building, which is a positive sign that Fiore — and perhaps Cocina Esperanza — will be coming back.

If you have any information, please email us at tips@myballard.com.

i have a bad feeling that this will become yet another condo/town house/apodment junk structure.

hope it can remain as some sort of business that the neighborhood would enjoy and patronize.

I live a couple blocks away, it is all wrapped up with scaffolding and it looks like they have been working on it finally now.

There was plastic over the building earlier this week , looks like exterior brickwork being done.

I asked via Messenger and was told they plan to reopen this April. 👍☕

@Katie To the Caffe Fiore Sunset Hill Facebook page? We’re not having any luck :(

Yes, last Wed morning.
me: “There is now work being done to the building. Do you plan to reopen?”
cf: “Yes, we are planning to reopen – sometime in April. Thanks!”

I hope Cafe Fiore remembers that we still have the round table. It has been cleaned up and stored safely in a nearby basement ready to be reinstalled.

Thank you Katie, they just responded with the same news, and we’ve updated the story.

bring back the gob shoppe

Someone near 73 and 26 had their lawn furniture burned to the grass the other night. Did they ever find the culprits? I know there have also been dumpster fires.