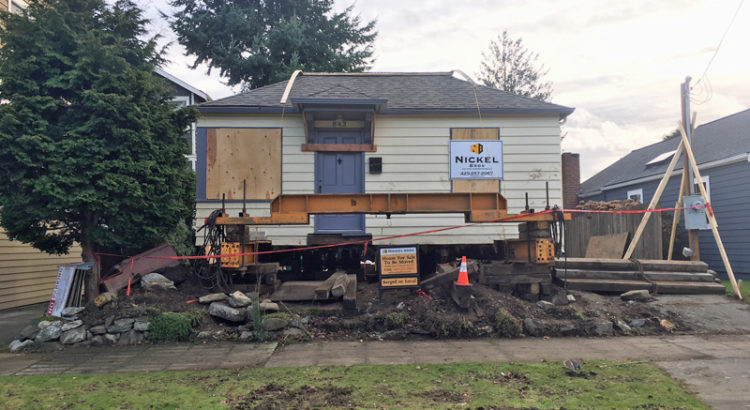 When a lot is sold and subdivided, developers usually demolish the house on the property. But this small Ballard bungalow at 843 NW 62nd St. is getting a second life.

The developer, NW Built, has partnered with Nickel Bros. to move the house this weekend. It will get packed up on a truck and transported — very slowly — to the boat dock at the end 14th Ave., where a barge will take it to its new owner on Lopez Island. The bungalow sold for $72,500 — which includes the price of delivery.

If all the permits come through, the big move will happen around midnight on Saturday night. A few days ago, Nickel Bros. moved a home from West Seattle via barge to British Columbia.

We spoke NW Built’s founder Keith Hammer — who lives and works in Ballard — and he said he looks for any opportunity to recycle materials from homes they take down or remove. Last summer they saved a cottage in Greenwood. The bungalow will be the second house they’ve moved.

Once the home is gone, NW Built will get to work on two 3-story single family homes that are “sustainable, energy efficient and green built.” They’ll be ready for occupancy in winter 2018.

We’ll keep you updated on the move. If you’re planning on watching, the City of Seattle requires that spectators say at least 50-feet away — and remain on the sidewalks if all possible.

A builder named Hammer. Love it.

They are probably removing the parking as well? Oh yeah, probably because no one has cars anymore? Shameless!

I don’t think there is a garage at this location.

I live right next door to this disaster. The whole process to date has been disruptive and unprofessional, Moving the house at midnight? Spectators? Guess I won’t be sleeping this weekend. Lovely to find out from an online source.
I shudder to think what the the construction phase will bring. Two three story houses on a tiny lot? Ridiculous.

I’m glad my neighbors didnt hate me so much they physically moved their house away from me.

But seriously, why not just make a party out of it and watch something really cool?

“angry neighbor” likely lives in the 3 story townhouse next door. the irony….

Guest
I used to live in Ballard...

yes “angry neighbor” has a three story townhouse that is one of six on two lots that were previous two single family homes. Truly, how do you buy a townhouse then become irate when townhouses are proposed next to your townhouse? Maybe he could buy a little house and move it to Lopez for some peace and quiet.

LOL yeah that’s pretty rich. We live in a new house here in Ballard, next to a very run-down home that is occupied by long-term owners. We’re 99% certain it will come down when the owners decide to sell and that we’ll have to contend with noise and reduced views/sunlight. But that’s life in a densifying city and it would be breathtakingly ignorant to complain about it.

I’m fairly certain you are the only reasonable person on here.

@Newbie — Then we are in deep trouble LOL But thank you.

So fellas, anyone interested in camping out on the sidewalk, having a few beers and watching them try to move this thing?

I can bring a cooler and a package of solo cups if someone wants to bring a radio and snacks.

Sure thing Jeff. A bunch in our neighborhood were talking about it. I’ve got a brand new Yamaha speaker that I’m fairly certain we can hear over the construction noise. Journey, Foreigner and Styx all night long. I think it’s going to be pretty big, I’ve seen a few Facebook events about it.

Will they be cutting power, cable, etc. on the street?
Asking for a friend.

Not sure, but I have a power inverter I can hook up to the RV to keep the music blasting.

It would be very interesting to see the market shift to moving homes that are affordable, safe and renewable.