‘The Ice Box’ arcade opens in old Allied Ice spot, bowling may be next – My Ballard Skip to main content 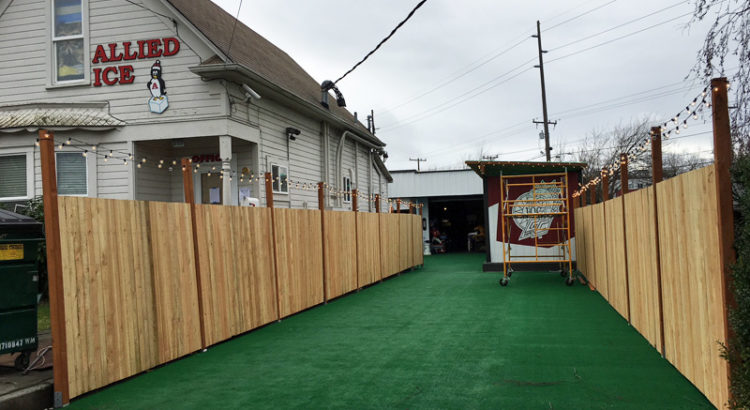 Over 45 years ago at the edge of Ballard and Fremont, Allied Ice was born, providing blocks of ice for the fleet of nearby fishing boats. As time went on, the business grew, delivering ice all over the Northwest to stores, sporting facilities and festivals.

Then in 2012, the business sold, and the Allied Ice facilities went up for lease.

Now the manufacturing space — tucked behind the Allied Ice home at 615 NW Bright St. — has become the home of “The Ice Box,” a new arcade packed full of pinball machines and vintage video arcade games. To find it, just follow the artificial-grass-covered driveway to the back. “I think we have more pinball machines than anywhere but the Seattle Pinball Museum,” said the Ice Box’s Tyler Morgan when we visited on Friday morning. Unlike the museum, there’s no entrance fee, and games cost 50 cents and up. With 30 machines and counting, Morgan said the plan is have as many as 100 pinball machines in all.

The founders have been running an arcade leasing business, and the new space doubles as a repair shop. We spotted several pinball machines opened wide, wires spilling out underneath. Several vintage video games were squirreled away in a side room, their monitors dead. Morgan said the selection constantly changes, as new games come and go. The Ice Box opened two weeks ago, and Morgan says the reception so far as been good, “mostly from the pinball community.”

But the arcade’s aspirations go beyond pinball. Morgan said they’re thinking about opening a two-lane bowling alley in a boxcar as well as a putt-putt golf course on the roof.

The Ice Box is open daily from 9 a.m. to 10 p.m., and keep an eye on the arcade’s Facebook page for upcoming competitions and events.

(Thanks Derek and Leslie for the tips!)