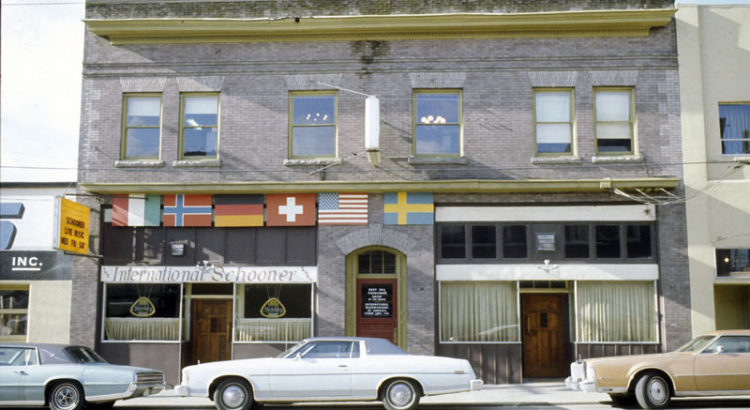 Update: Um, it seems we’ve crashed the Municipal Archives site with all the traffic. So you may have a little trouble clicking the links below for a bit.

Earlier: If you’re like us, you love Ballard history. So when Seattle City Photo Archivist Julie Irick told us about 738 new Ballard photos from the 1970s — including businesses, houses and landmarks in high resolution — we were thrilled. And it’s all available online.

For example, where’s the photo above? What’s in that building now? Before we give you the answer and share more of our favorite photos, here’s a little background.

The photos are divided into two collections. The first batch of 502 black-and-white photos were taken by volunteers working with the Historic Seattle Preservation and Development Authority “to create a visual inventory of urban design, historical, and architectural elements that give Seattle ‘its unique character and identity,'” Irick explains. Most of the photos are labeled with an address, including quite a few houses — if you’re lucky enough to find your own home.

The second batch of 236 color photos features “clearly identified addresses of homes and businesses captured between 1974 and 1980,” Irick said. It includes photos of Old Ballard, Salmon Bay, the Ballard Locks and even the 5th of May parade from 1975. Some of these photos, thanks to a grant from 4Culture, are included in this online exhibit about the Ship Canal.

Ok, now to a few of our favorites. If you see something of note while browsing the collections, please leave it in comments below.

The image at the top of this story is The International Schooner at 5213 Ballard Avenue NW in 1975. Today it is… The Tractor Tavern. The Scandinavian Værsgo restaurant on the corner of NW Market St. and 22nd Ave. NW. in 1975. Today there’s a Starbucks in that spot. (Anyone know what’s on top of the building? Antennas?) Ballard Hardware at 5225 Ballard Avenue NW., 1975. It’s still in business today a short distance away. And what’s in the building now? Kings Hardware on the left, Rudy’s Barbershop on the right. And see that sign in the far right of the photo? That’s Hattie’s Hat. Ballard Elks at 5301 Leary Ave. NW, 1975. They’ve since moved to a new location on Seaview Ave. But what’s in this spot now? The Olympic Athletic Club. Here’s a fun one: Ballard Celebrates Norwegian Constitution Day on May 17th, 1975

We’re going to keep adding photos as we find new ones. If you find some gems, please let us know in comments below…