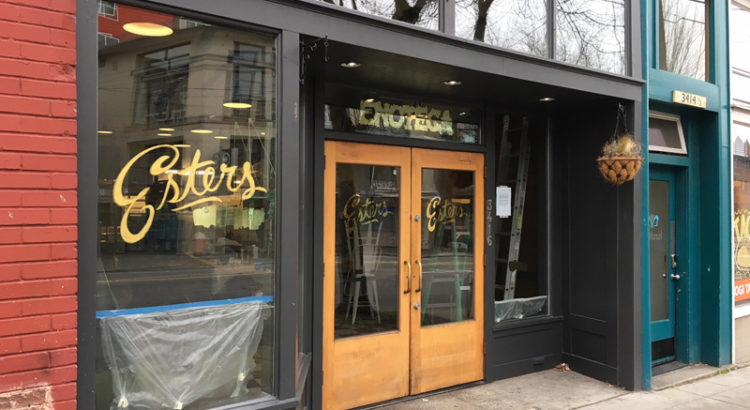 Lots of quick updates from Ballard and Fremont…

ESTERS – The owners of Piccolo in Maple Leaf, which shut down last year, will open Esters Enoteca soon in the old Homegrown spot at 3416 Fremont Ave. N. “Grab a quick panini to go or stay and enjoy a glass of wine, local beer or one of our house-made sodas,” reads the sign on the door.

RESTAURANT ROUX – Speaking of Fremont Ave. spots, Restaurant Roux will close on February 18th. “After some soul-searching, we decided to accept an offer to sell Restaurant Roux,” explained owner Matthew Lewis. (No word on the identity of the incoming restaurant.) For fans of Lewis’ food truck, Where Ya At Matt, don’t worry: it’s not going away.

LUCKY ENVELOPE – The Ballard brewery is launching five specialty beers for its Chinese New Year celebration on Feb. 16th and 17th. “Last year’s celebration was such a great success that we decided to extend the event to two days this year,” said Raymond Kwan, co-founder of Lucky Envelope. The beers include Buddha’s Hand Citron IPA and Lychee Sour.

BREWERY DISTRICT? – What do you think about the growing use of “Brewery District” to describe Ballard’s industrial neighborhood? That question is from FreeBallard in the forum, which is now in working order — so head on over and chime in. (To create your own username and avatar — which also displays in comments — you can register quickly here. Once you’ve created your account, click your profile to upload an avatar.)

RAPIDRIDE TO UW? – Over at the Urbanist, Doug Trumm wonders why there isn’t a RapidRide route that connects Ballard and UW along the water. He breaks down the idea in maps, and he adds, “I’m just a guy who wants his commute to the UW in the morning to be more dependable.”

SOUND TRANSIT – The Ballard-West Seattle light rail advisory group met for the first time on Thursday night, and the West Seattle Blog was there.

SOLSTICE POSTER – For those designers and artists out there, the organizers of the Fremont Solstice Parade are looking for proposals to design this year’s parade poster. If you win, you get $250 bucks and lots of bragging rights. Proposals are due March 19th.

FISHING VESSELS – A bill by Rep. Gael Tarleton (D-Ballard) that provides “temporary incentives to support the rebuild and replacement of aging fishing vessels” has won state House approval. “This bill gives badly-needed support to one of our most prosperous industries, while also accelerating our transition to a clean-energy future,” Tarleton said. The bill now moves to the Senate.

FISHERMEN’S TERMINAL – The Port of Seattle announced this week that Delmas Whittaker is taking over daily operations at Fishermen’s Terminal. He replaces Kenny Lyles, who was recently promoted to director of Fishing and Commercial Operations, a department that combines Fishermen’s Terminal and Terminal 91.

Have news? Let us know by emailing tips@myballard.com. Have an event? Submit it here.

“badly-needed support to one of our most prosperous industries”

While were at it I think we should give billions of dollars of gov’t money to Apple. I heard Iphone sales are down.

Yes, her comments sound like “jumbo shrimp” to me. They count on your feelings, not real words. Without chaos and crisis WTF would she have to offer? Besides, it’s not her money after all. “Clean energy” for fishing vessels is right up there with sustainable underwear to me