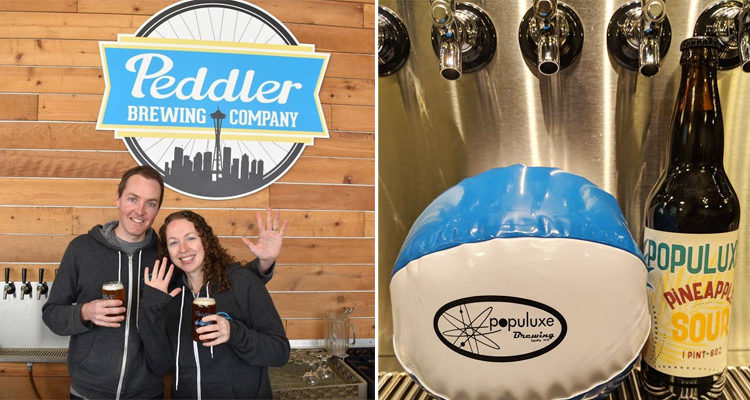 Five years ago, the Ballard brewery scene kicked into high gear. Two breweries, Peddler and Populuxe, opened on the same Friday a few blocks from each other. They joined mainstays Maritime Pacific, Hale’s and Hilliard’s, as well as relative newcomers Reueben’s, NW Peaks and Urban Family in the neighborhood.

“March 8, 2013, was the day this thing really broke open,” wrote Daniel Person in Seattle Weekly back in 2014. “In the eight months to follow, what was once a crowded five-brewery scene became something altogether different: a brewing district that borders on the absurd, where one can walk less than two miles and drink 10 beers by 10 different brewers.”

Now those two breweries are celebrating their 5-year anniversaries on the same day — this Saturday — with respective parties.

Populuxe Brewing is throwing a “Ballard Beach Blanket Bingo” event from noon to 10 p.m. They’ll be handing out free beach balls to the first 100 customers as well as other prizes throughout the day. They’ll have a limited bottle release of the Populuxe Pineapple Sour and “unique kegs and pins tapped throughout the day.” The entertainment starts at 5 p.m. with all ages bingo, and the music kicks in at 8 p.m. More details here.

Peddler Brewing will be celebrating from 11 a.m. to 11 p.m., and they’ll give away 500 can-shaped glasses commemorating Peddler’s 5-year anniversary. They’ll have a limited one-day release of a special anniversary beer: Le Mont Ventoux Aged Belgian Sour. Live music gets underway at 6 p.m. in the beer garden. More details here.

Sounds like a great excuse to roam Ballard’s breweries on Saturday.