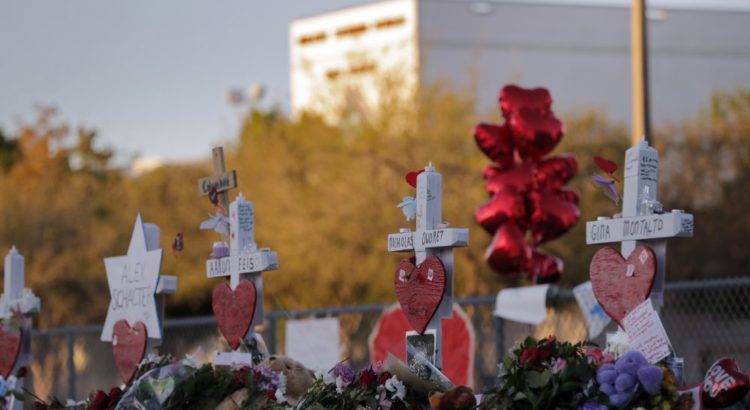 We spoke with Ballard High principal Keven Wynkoop, and he said there are two events at 10 a.m.

“The student led walkout (unsanctioned) will be on the corner of 65th and 15th by the stone Ballard sign. They will have 1-2 minutes of silence at 10:00 and then student speeches followed by Governor Inslee,” he said. “We also have a sanctioned event on the track that staff and students can participate in where they will be walking the track quietly for the 17 minutes.”

Governor Inslee has been supportive of students speaking out against gun violence. “I’m glad they’re speaking up,” he said on Tuesday. “I want to thank them for their voices.”

Earlier: Students in dozens of Seattle schools — including in Ballard — plan a walkout on Wednesday as part of a national effort “to protest Congress’ inaction to do more than tweet thoughts and prayers in response to the gun violence plaguing our schools and neighborhoods.”

The walkout is planned for 10 a.m. and will last 17 minutes, one minute for each student killed in the shooting at Parkland’s Marjory Stoneman Douglas High School.

While the school district isn’t detailing which schools are expected to participate, a map on the organizers’ website lists Ballard High, Salmon Bay, Whitman Middle and Whittier Heights schools. A week ago, the school board passed a resolution calling on lawmakers to increase gun safety.

Then on March 24th, thousands of Seattleites are expected to participate in March For Our Lives, starting at 10 a.m. at Cal Anderson Park at 10 a.m. and ending at KeyArena. Emilia Allard, a senior at Ballard High School, is helping organize the event.

Wear orange on Wednesday in support of the kids!

Support them for what? Our education system already produces lousy results, and kids are walking out, again. Sorry, I refuse to buy into this prepared garbage. More kids will die today in auto wrecks/crashes, yet nobody is asking for bans on cars or blaming GM when a Chevy is in a crash. Just another ice bucket challenge moment where kids can say yeah man, I was there and I really care. And good old Jay gets a publicity stunt out of dead kids. Lame

@Scott: Well, our country’s education is severely underfunded and under performing, compared to other first world countries and even a few third world countries. Neither national congress nor the state legislature have any desire to fund it. Of course, that would require raising taxes and/or rolling back tax cuts on the 1% and apparently we’d rather our kids get dumber.

Auto fatalities are not only down, but down significantly, especially with kids. You want to know why? Studies on how to reduce traffic related deaths and safety regulations by the government.

Studies on how to reduce gun deaths are banned at a national level and the NRA, a gun manufacturer lobby, threatens the political careers of anyone that proposes regulations.

Good to see you’re still completely out of touch with reality!

This is their world. I support them absolutely.

I support students and their interest in politics.

Haha, I love how kids aren’t protesting the insane college tuition (Education Industrial Complex, anyone?), the resources wasted on unteachable delinquents (no habla inglais) or the fact that the scare housing and entry level jobs were voted away by their “progressive” parents and teachers.

Yeah, we do have a gun problem in America. We also have a single mom in poverty epidemic, as well as the overall destruction of the nuclear family and community networks thanks to job exportation, radical leftist gender ideology, and smart phone apps/social media.

Hug your dog babies, liberals! That’s all you’ve got left. The funniest part is, ask anyone from anywhere else – especially immigrants – and they will tell you the same thing. Bubble progressives live in a narrative.

I support the kids as it is their world and their future.

Ok, so you realize you’re demonizing roughly half of the country right? You neighbors, either blocks or miles away? Your fellow citizens?

When politicians start manipulating children and demonizing citizens for exercising their rights, then totalitarianism isn’t far away.

Btw, Inslee et al have their own security and probably a gated home. Most of us proles do not.

@ any adult that tries to invalidate students and their voices just because they are young In my junior year of high school (2015) a freshman was reported to have a gun in my school (Ballard High School). The school was on lockdown for about two hours. for at least an hour, I was hiding in a pantry with my classmates. We were told it was a lockdown and that it was not a drill. we saw people in their uniform surrounding our school with guns (before we hid in the pantry) and you don’t know how quickly my fear set in. no one on the news was saying anything and students and staff had no idea what the issue was. students quickly began to message our families letting them know as soon as we heard that it was reported that a student had a gun. So excuse us for actually being affected by things. excuse us for wanting a change. excuse us for feeling unsafe in our own schools. maybe you don’t think our voice deserves to be heard but guess what? we are building the kind of world we want to live in once you die so please,… Read more »

“a freshman was reported to have a gun in my school”

tons o’ guns everybody’s getting strapped
tons o’ guns got to watch the way you act
tons o’ guns real easy to get
tons o’ guns bringing nothing but death
tons o’ guns are in the streets nowadays
it’s big money and you know crime pays
check your nearest overpopulated ghetto
they greet you with a pistol not trying to say hello
mad kids packed ‘cos the neighbourhood’s like that
want some shit that’s fat catch a victim do a stick
kids pulling triggers, niggas killing niggaz
five-o they sit and wait and tally death-toll figures
it’s crazy there ain’t no time to really chill
jealous motherfuckers always want to act ill
22’s 25’s 44’s 45’s
mack elevens ak’s taking mad lives
what the fuck you gonna do in a situation
it’s like you need to have steel just to feel relaxation
tons o’ guns

I think the thing that we can all agree on is that what everyone should be doing is using national tragedies to increase their social media presence.

Thanks, Graciela, very well put. Please keep the flame burning, you and your friends. You will be voters soon, and we need you.