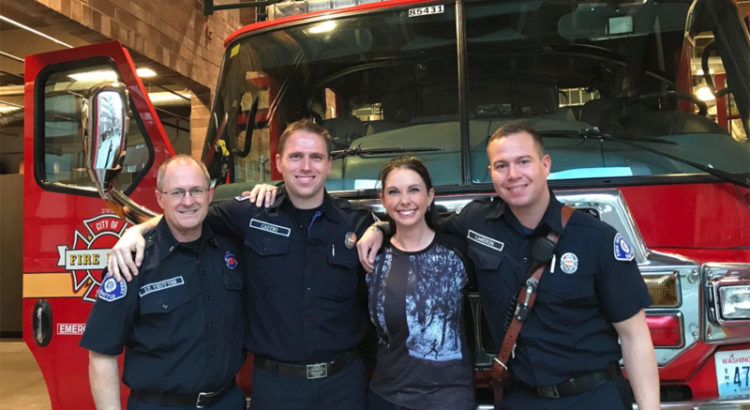 It’s been just over a year since Kelly Herron fended off an attack in the Golden Gardens restroom. Firefighters at Ballard’s Station 18 responded that day, tending to her cuts and bruises.

In a dinner at Station 18 last week, Herron reunited with the same firefighters. “Kelly, we admire your bravery and are happy to see you again,” said Seattle Fire on Twitter, sharing this photo.

Training for a marathon run, Herron had just dried her hands in the public restroom at Golden Gardens when police said 40-year-old Gary Steiner was hiding out in a stall and attacked her. Fresh off a self-defense training course, Herron fought back and managed to escape. Police arrested Steiner — a level 3 sex offender with prior convictions for assault — who is facing charges of attempted rape and assault.

Since the attack, Herron has become out outspoken advocate of self-defense training, occasionally hosting free classes for the public.

“I’m happy that my story could inspire people to have a voice, not just in physically fighting back but also in standing their ground and not letting other people underestimate them,” Herron said.

She’s a tough person. Too bad the creep is still breathing.
This is yet another cold dose of reality that reminds us all:

1) firearms are are an effective force equalizer for victims facing larger/stronger attackers, and if firearms are “bad” to you strongly consider self defense courses and pepper spray.
2) the criminally negligent city leadership has filled the city with dangerous felons and forced us to pay for them. Gee, if parks after dark are filled with junkie felons, how safe are joggers etc?

The attacker was a down-on-his-luck, homeless camper, repaying us for our compassionate civic policies.

Be careful spewing that hateful rhetoric! Don’t you know, as citizens of Seataxxle, we’re supposed to provide 90% of our income to useless and solution-less homelessness policies? You dare not speak out against our Homeless Czar and his liberal sheeple!

Kelly, so glad that you were able escape your attacker unscathed, and helping others learn how to fight back!

A “descent into idiocy,” or shear frustration with the path that failed “progressive” policies are taking us? I am inclined to believe the latter as more evidence of Seattle style liberalism yields few results favoring better public health and safety for the general public. Pandering to drug addled street campers is not helping. This guy was one, and a convicted sex offender from Arizona to boot.

Why would you take a photo with your attackers…

@Andrew Daisuke
Your smug ad hominem attacks on accurate comments is not any kind of argument, in the same way that throwing your cat at a violent felon will not prevent you from being a victim. Try harder.

Don’t be too hard on Andrew, it’s clear he’s been consuming gallons of the liberal, knee-jerk, pander-to-the-homeless kool-aid so many others in this city have been drinking of late. At some point, when one of these wonderful examples of humanity parks their meth lab in front of his house, uses his yard as a toilet, and takes his belongings to pay for his habits, Andrew will stop having a bleeding heart and start having a logical one. Until then, this is what you can expect most Seataxxalites to think.

@Homeless Fiasco
And hot on the heels of Pedo Murray’s .22 cal ammo tax – which the city now wonders “how to spend” the $93k collected – Durkan is pushing for a law requiring all firearms to be locked. Neat. No cops, city full of freeloading felons, and now an extra barrier to using an emergency tool for self defense.

These kids marching out of classes in Seattle should be more worried about the scumbags on the street they encounter walking and riding the bus, but hey, Inslee et al prefer to demonize their fellow citizens who exercise their 2nd Amendment rights than look at the dangerous messes they make in King County. Look at California.

Guest
They're All One Person

Who let the socks out?

@They’re All on 22nd Ave
If by “socks” you mean “sex offenders” then it would be our ineffectual city prosecutor and the revolving door justice who “let them out” of jail or custody. Keep flailing and failing, and don’t forget to give all the cuddly-wuddly tweaker hobo rapists a big hug on your way to to the protest rally.

@Uff da: No, it’s definitely a descent in idiocy. I mean the top sockpuppet handle on this thread is “O’Brien’s Kids”, implying that our representative councilmember is somehow directly responsible for this attack. The comments then further descend into completely irrelevant idiocy.

I just hope my comment doesn’t trigger our poor sockpuppet. His tiny little hands can only take so much criticism, while dishing oh so much! :/

@ Truth, it’s like these crazies live in some other world isn’t it? Banging away with their tiny hands on their keyboards, railing against all these boogymen.

Guys, go outside, be a part of your community. Ballard isn’t going back to whatever it was you think you liked about it 30 years ago.

I’ve watched 22nd, Commons Park and the Library degenerate into a circus of criminality and disgusting human failure over the last 2-3 years, presided over by a people with similar mentalities as yours, Andrew. Your strawman about “things aren’t going back to 30 years ago” is up there the best of Truth’s bass ackwards cornball takes. New York is safer in many places than Seattle. Get a freaking clue, and stop tone policing. You guys go from praising the anti-gun marchers for “demanding safety” to mocking taxpayers and business owners fed up with the crime, filth, and its tax fattened apologists in city hall.

Go outside? I’m outside every day. Why don’t you travel more and get back to me about why our city finds it acceptable to to tolerate this dangerous clown show when others simply do not. As soon as the weather started to turn, the felon RVs have lined up along the BG trail. Nice. If your precious Amazon or any other company were run this poorly, they’d be out of business before you could say “Elizabeth Holmes”.

This is some sort of model of a well run city? Been to Singapore, Japan, Europe?

@Andrew: I’m not entirely convinced that they would like Ballard 30 years ago, 50 years ago and definitely not 100 years ago. This (likely) one person, many sockpuppets, is probably a recent transplant from a very sheltered Midwest suburb. They landed a lucrative job at a Seattle company, moved west, to the “big city”, and are having trouble coming to terms with the reality of living in a city, resulting in the mental illness you see in their posts. Their sentiment is very strongly of someone who has not traveled the country and seen what actually goes on in a city. 99% of Ballardites go about their daily lives and do not share the insane viewpoints of Mr. Sockpuppet. @Sockpuppet: “New York is safer in many places than Seattle.” New York also spends something like 30 – 50% more PER CAPITA on their police force. Also, what do you mean by safer? Seattle has more property crime, but New York has more violent crime. Also, you’re one to talk about “strawmen”. A vast majority of your posts complain about SJWs, progressives or whatever grinds your gears at the moment, as the source of Ballard, Seattle and King County’s homeless and… Read more »

Thank you Station 18 and to my caring Ballard neighbors for the support over the last year.

JM98107, you are repetitive and need to get a life. You sock puppet all over the place literally for years now, to the point where I saw a Facebook comment regarding Ballard-and, sure enough, your verbiage was immediately identifiable. Thing is, you were using your real name…

@ O’Brien “Been to Singapore, Japan, Europe?” Yes, I have! I’ve even lived abroad while serving in the military. Seattle (and the rest of the U.S.) does not have nearly the same tax burden and revenue as the cities in these nations. These nations have a much broader social safety net — essentially something close to a universal basic income — funded by 50%+ income, VAT and other taxes. It isn’t tough policing that keeps these nations crime rates down, it’s a broad social safety net and a lack of access to firearms. Essentially, there’s little crime because there are few desperate people. And there’s little violent crime because people don’t have the means to carry it out. So I’m a little confused by your comment. You seem to be citing these nations as examples of what Seattle should strive to be. On the one hand you hold up nations that have implemented policies that in the U.S. would be considered left wing, while on the other you decry the liberal leadership of the city and state that are trying to move us in the same direction. Are you advocating a state or local income tax or some other massive… Read more »

@J Let me get this straight: park rapists, ghetto thugs, and murderous tweakers are the result of lack of universal basic income? Wow. Just wow. New York is safer than 30yrs ago due to “Stop and Frisk” policies – among other things – and aggressive policies under Giuliani , but is a city/state noted for its bloated spending. Could Seattle “spend smarter” and police better? Hey why even ask that question? But, in point of fact, Durkan herself now says things that “evil Trump voters” in the region have been saying: https://www.seattletimes.com/seattle-news/politics/mayor-durkan-will-ask-seattle-departments-for-budget-cuts/ Singapore has strict laws and law enforcement, and many places in Europe – with some glaring exceptions now thanks to “progressives” – have effective police forces with fast response times. I highly doubt it would be acceptable to allow mentally ill felons/junkies to “refuse services” and just wander around stealing, and sometimes raping and murdering. They would be sent to some sort of facility by a legal panel depending on the particulars of the country, but here we just let them camp in RV’s and our “precious” green spaces. Don’t cut down that tree, Jane Q Citizen, but Hobo Jim can pour his RV septic waste into the… Read more »

@Sockpuppet: Clearly reading or comprehension aren’t your strong points. Let me get this straight: park rapists, ghetto thugs, and murderous tweakers are the result of lack of universal basic income? Wow. Just wow. Well, if universal basic income includes things like well funded education, universal healthcare, ample low income housing, mental illness treatment, drug addiction treatment, rehabilitative rather than punishment based justice, then yeah, those strawmen of yours diminish significantly. New York is safer than 30yrs ago due to “Stop and Frisk” policies… Um nope. Even a quick Google search of “New York stop and frisk” shows a bunch of articles talking about it’s lack of effectiveness. Plus how would a borderline unconstitutional police action be considered a good idea, even if it showed limited effectiveness? Singapore has strict laws and law enforcement… So we should adopt the corporal punishment and insanely strict laws, such as a ban on chewing gum and a ban on spitting? Yeah, the 8th Amendment was added to our constitution for a reason. Harsh laws and punishments do not reduce crime. Don’t cut down that tree, Jane Q Citizen, but Hobo Jim can pour his RV septic waste into the sewer and cook meth. It’s… Read more »

Thanks for being so brave & sharing your trauma with us. We can’t let this kind of person force us to stop living. Your strength is an inspiration to everyone to continue to make Ballard a hospitable neighborhood.