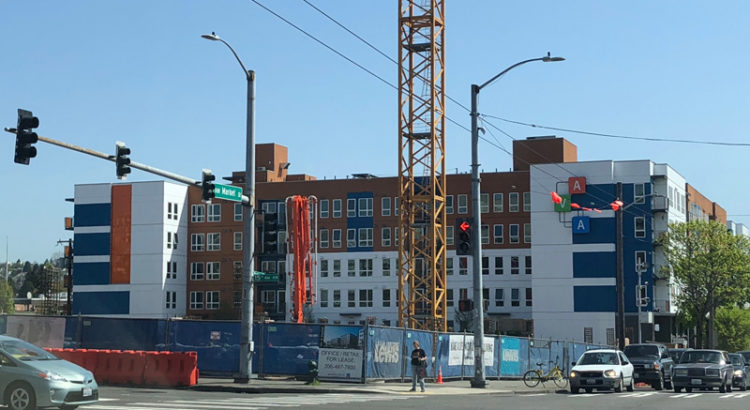 Updated: For years there have been rumors of Target coming to Ballard, but now it’s official.

My Ballard has learned Target has signed a lease to take the first floor of the new office building at the corner of 15th Ave NW and NW Market St., according to real estate developer Martin Selig.

Target will join Polyclinic, WeWork and Equal Exchange coffee in the new 200,000 square-foot office building that’s under construction where the Shell gas station was located. It’s slated to open in the first quarter of next year, Selig said. Given the available square footage, it’s unclear if the new store is a CityTarget — a smaller, urban version of the discount store, like the one in downtown — or an even smaller TargetExpress store. When we reached Target this afternoon, it provided this statement:

At Target, we continuously explore possible locations for new stores, including in the Seattle area. We are currently focused on new store growth with our small-format stores, which are smaller than our general merchandise Target stores and are located in dense urban and suburban neighborhoods as well as college campuses. I can tell you we are pursuing the opportunity to reach guests in the Ballard neighborhood, but at this time, we’re not at a point where we can share any new store plans.

The building is located on Ballard’s busiest corner, right next to the proposed location of the Ballard elevated light rail station. One of the few office buildings in the neighborhood, it has has underground parking for 253 vehicles.

“There really is no office space market in Ballard,” Selig told us, explaining they’ve had to work hard to lease the 5-story building, which is now 80% leased. “All that’s left is floor 3,” he said.

(Our thanks to K and Scott for their tips that led to this story.)

49 thoughts to “Target is coming to Ballard next year”