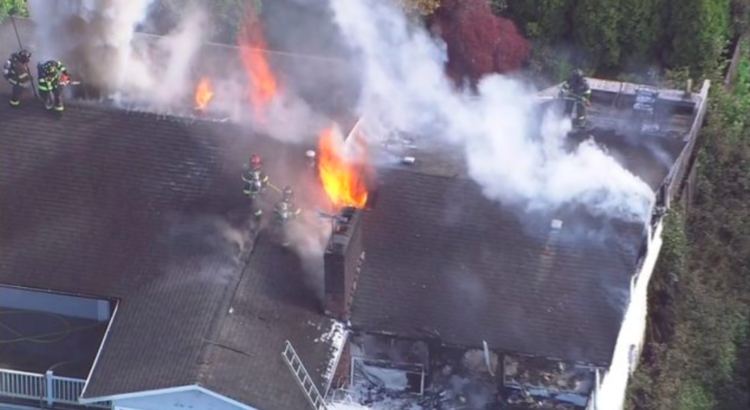 Tuesday update: Seattle Fire says a 77-year-old woman perished in the fire, and investigators ruled it was accidental.

Updated: The Seattle Fire Department extinguished a house fire in the 2100 block of NW 96th St. this evening. Firefighters say one person has died in the blaze.

Crews were first called to the scene just after 4:30 p.m. and confronted smoke and flames shooting through the roof. They discovered the fatality in the living room on the second floor.

Fire investigators were at the scene for several hours. There’s no word on the cause of the fire.

Heard all the sirens and then the helicopters knew it was bad at that point, sad for sure on 85th and 12th NW😓

So sad. This house is near Blue Ridge, not part of Blue Ridge.

Thank you, we updated to North Beach.

Location not in Blue ridge, but close as previously mentioned. Olympic Manor or North Beach. In late 50s there was an Army antiaircraft site (later was run by Washington Army National Guard. A Battery 770 Artillery Group) within a block. Location where playground is now.

Fire is very scary, especially it it happens at night but as this was in the day it is a warning to us to have smoke and CO detectors plus fire extinguishers, reduced clutter, etc.

True. I would rather be prepared to extinguish the fire myself instead of waiting for the SFD which didn’t get there soon enough to save anyone.

You don’t even know if the fire caused their death. It’s too early in the am for your Libertarian rhetoric. Go live off the grid or something.

“I put both of those organizations in the same category of people arriving late to clean up things”.

It’s strange then, Elizabeth, that the SFD arrives soon enough to clean things up when a witnessed cardiac arrest occurs – the highest survival rate in the world (www.sca-aware.org). Their average response time to a fire, from the alarm ringing in the station, to arrival on scene, is currently 5 min. 30 seconds.

Do you remember a few years ago– there was another fire that killed several people. I believe it was a poor migrant family.

In that case, SFD personel did not attach a ladder properly to the truck and it fell off, causing a long delay. Incompetence? Yup.

I would to see North Beach fire.But i think its not part of Blue Ridge. https://canlitv.center/

Lovely read! One of the best google games for free is Rise in Love! It looks easy but actually it is challenging! Start playing and you will love it!