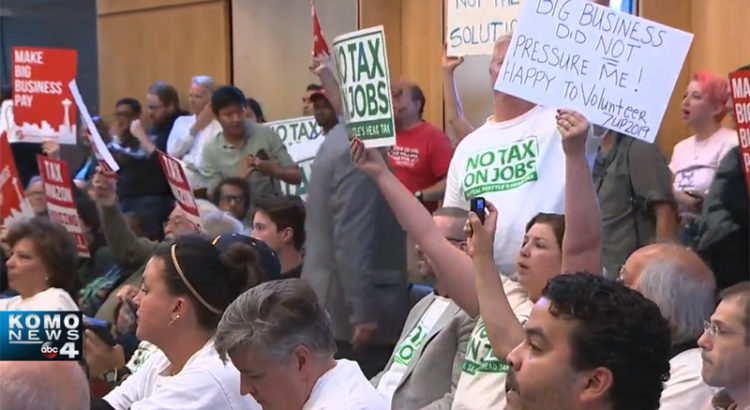 That didn’t take long. Just less than a month after the city council voted 9-0 in favor of a head tax on big Seattle businesses, the same council voted 7-2 to repeal it amid chants from the audience.

In a statement after the vote, Amazon said it was “the right decision for the region’s economic prosperity.” The company said it was “deeply committed to being part of the solution to end homelessness in Seattle.”

Yesterday Mayor Jenny Durkan and and 7 councilmembers published a statement. “We heard you,” it said. “It is clear that the ordinance will lead to a prolonged, expensive political fight over the next five months that will do nothing to tackle our urgent housing and homelessness crisis.”

“Hopefully it’s not the end of anything,” said Seattle City Council President Bruce Harrell after the vote. “Hopefully it’s the beginning of something.”

“The people who have won are the conservative groups and big businesses, funding organizations who support Trump, who oppose civil rights, and who are refusing to participate in shared responsibility,” tweeted Councilmember Mosqueda.

The council voted after organizers of a referendum to repeal the head tax said they had secured more than enough signatures to put it on the November ballot.

You can watch a video of the proceedings here on KOMO’s Facebook page.

Me tonight…. but with a beer while wearing shorts and a torn t-shirt:

Listening to Kshama Lama Ding Dong have a meltdown was beautiful to hear, especially on my Amazon Echo.

Since Seattle’s looney left is calling Bezos a “fascist” now, I had to ask….

“Alexa, how many people did Marxism kill in the 20th Century?”

Best part is when she says she’s speaking as an economist (or 3rd rate adjunct economics professor at a community college, but whatever) and the room breaks out laughing… https://www.youtube.com/watch?v=NCIqubbLgAI

wow. listening to her unhinged ranting makes me even more shocked that she was ever elected. such an unlikable person on so many levels. stop shouting for once, for a start.

Off to social justice re-education camp for you.

Shrieking is her first language.

This one is has a cringe-y crowd of protesting soyboys and bad sjw hair who seem to think Seattle is a giant community college. Comedy!

““The people who have won are the conservative groups and big businesses, funding organizations who support Trump, who oppose civil rights, and who are refusing to participate in shared responsibility,” tweeted Councilmember Mosqueda.”

At this point, to these lunatics, anyone who wants a job, a family, a safe city (and country!) is now an implied “racist” who “opposes civil rights and shared responsibility . Not only did she lose, but she managed to insult the CITIZENS OF SEATTLE WHOM SHE REPRESENTS. Pathetic.

Mosque-ada should travel abroad, and perhaps select a new country of residence that is superior to the USA.

Come on, you’re a nazi, just admit it! Elenchos will be along any second now to call you one anyway.

Of course when you vote both for, and against something, you can always say, I had nothing to do with this.

I still can’t tell if this means Mike O’Brien found his wife and got his b@lls back because listening to him whine at City Hall today, you’d think she’s still keeping them in that jar she pickles stuff in.

Again, even I find this offensive. Editorial comment from an appendage of Mike O’Brien’s body, such as his nut sack, is artful trolling the guy has earned. Even though, the man is a horses a*s with along history of ignoring people, just attacking his body parts or his masculinity, is not cool!

His b@lls say nothing about his gender. Gender is a social construct.

And saying a wife has her husbands balls in a pickle jar, invokes that that exact construct, and attacks the man as being less “manly”.

Replace b@lls with spine then. And no offense to invertebrates.

I personally know crustaceans with more spine than Mike O’Brien.
“Gone in 2019!”

“Yesterday Mayor Jenny Durkan and and 7 councilmembers published a statement. “We heard you,” it said. “It is clear that the ordinance will lead to a prolonged, expensive political fight over the next five months that will do nothing to tackle our urgent housing and homelessness crisis.””

If I may be so bold as to borrow a line from one of the greatest movies of all time, Mad Max Fury Road: “Oh what a day! What a lovely day!”

Worth it to shut up the Ballard whining. Now they can pay instead of Amazon.

True that – now *I* can pay for city services out of my own pocket. Huzzah!

And pay for those services for business also. Seattlites are morons.

Yep, charity begins at home. I sent $50 to the United Way today.

Whether this was a good idea or not, I think the message was sent: quit passing legislation without representation. Listen to the people first (even if, as some say, the ‘people’ were bought by Amazon), and then work in their best interests. The people that pay taxes pay the Council’s salary, and maybe the Council has just now started to figure that out. Accountability goes a long way towards being able to both ask for, and receive, funding for social programs. Maybe that’s all the people have wanted from day one. It’s the oldest tenet in the book…no taxation without representation.

Oddly enough, I believe Seattle would support some sort of added tax…if it would effectively solve the homeless issue. In other words, if that tax was tied to a zero-tolerance policy for tents and campers.

Old drunk Scandinavians and the rest of Seattle wants it ALL and and to pay nothing for it. “The city is ruined” LOLOLOLOL

Guest
anyone but mike

Totally agree. If the city council were to say — “There were on average 140 families living on the streets. We want to build 140 units of 2 and 3 bedroom public housing over 2 years. To build the 140 units will cost 50 million. We also want to spend an additional 4 million a year to hire a staff of 30 social workers for 5 years (total of 20 million) To raise the combined 70 million, we will raise the B&O tax for every business X% per year for 5 years.

Most Seattle voters would support that.

Instead, we are being continually asked to provide emergency housing for heroin addicts, who are allowed to litter, trespass, and get high in nearly any space in the city (except madison park of course).

I think you’re right, but I believe that’s been the problem from day 1 – separating the actual needy (and those who want to get clean) from those who don’t want to stop their destructive behaviors (and also want to leech of our compassionate natures). If the Council had set some rules for these encampments, maybe we would have a system in place to designate those who need help versus those who give all the homeless a bad name.

I don’t see building housing as a solution. And I don’t see giving housing to people in tents as something taxpayers would support. Where’s my free house? I do think some sort of barracks-style or half-way house situation would be supported.

Matt, I’m with you. Where’s my free house, my free mortgage, my free couch, etc? I think the concept of ‘free’ housing for those who were looking to re-enter society (and here’s where it gets tricky, because Seattle has done a poor job of separating the worthy from the junkie/grifter/handout-seekers) is more along the lines of: Enter some sort of works program. You’ll earn some money, and by working you’ll feel you have some sort of self-worth. We’ll subsidize your housing (it won’t be great housing), and hopefully, you’ll want to do more to better yourself and re-enter society. Maybe the ‘free’ housing/works program should come with some sort of stipulations like: no booze, no drugs, no fighting, show up to work on time every day (unless you have the flu or something like that), and you’re only allowed in the program a maximum of two years, after which point, you need to re-enter society. Failure to do so results in no re-admittance to the program for a minimum of two years from date of removal from the program. Is it perfect? No. Is it better than the (invisible) ideas the Council has presented? I like to think so.

Why is it we have to endure Sawant’s incessant goon squads at these meeting and elsewhere? Turning this urgent meeting into a circus does what for common sense/decorum? It’s obvious what she is up to and her time has come, and now is gone + done with. As in back to reality. Enforce existing laws on the books and in place. Hey Elenhos: your silence is deafening and BRILLIANT

As I watch the evening news show the attendees shouting, chanting and interrupting the various meetings I am wondering why it is permitted. There used to be a semblance of order and respect at these council meetings (Robert’s Rules of Order comes to mind) but now it’s a shouting match. I wonder how many other cities attempt to conduct their business in this kind of environment. Basic civility is a requirement for meaningful discussion.

Tell’em about it, hit em where it hurts.

Holy crap, Harley Lever and his merry band of sockpuppets are on a rampage in the comment section. It’s like he’s taking a victory lap for a race he didn’t run and never really existed, except in his wacky mind.

Ahh, good old Truth is just as out of touch with reality as always. Keep swinging, Punchy.

Pot calling the kettle black there Harley. But hey, you got me with your typical 4 drive-by downvotes, so congrats?

But don’t let me disturb your comment circle-jerk. You seem to be on a roll. 32 comments and counting!

Yeah, Truth, all 45,000 signatures were from “Harley Lever”. Comedy

Neither of my comments reference anything about 45,000 signatures. Nice strawman there, Harley.

Now that I know you are the sockpuppet, I must reiterate my suggestion that you get mental help. You’ve devolved into a downward spiral of some bizarre, alternate reality both online or in real life.

In 2012 the Legislature passed Marriage Equality. Referendum petitions were filed. The Legislature did NOT call a special session to repeal the law — it went to the voters who enacted it in November.
Just saying

…and a million angry cat ladies and nonbinary twitter warriors were born.

Kirk- are you still selling your Sounders tickets? PM me if they are still available.

@ Truth: you should be hiding under the sheets. But instead, you refuse to admit you and your ilk are THE problem, and continue to throw bombs here. How bad must it get here before you wake up man? Delusional is the only word I can come up with. Is the sky blue in your world?

But instead, you refuse to admit you and your ilk are THE problem…

Gosh, you’ve opened my eyes! The homeless problem is all my fault! If only I had listened to the wacky right wing nut job on my neighborhood’s blog and we wouldn’t be in the homeless crisis we’re in!

Thank you so much Scott for setting me straight.

“It is clear that the ordinance will lead to a prolonged, expensive political fight over the next five months that will do nothing to tackle our urgent housing and homelessness crisis.”
What political fight? The public was going to repeal it. No fight about it. Stupid council jerks cannot even admit how far out of touch with their own constituents they are. Now if the public can just find some candidates to replace the current city council the fight can be saved for the next election cycle. We need candidates who will actually represent the taxpayers of Seattle!