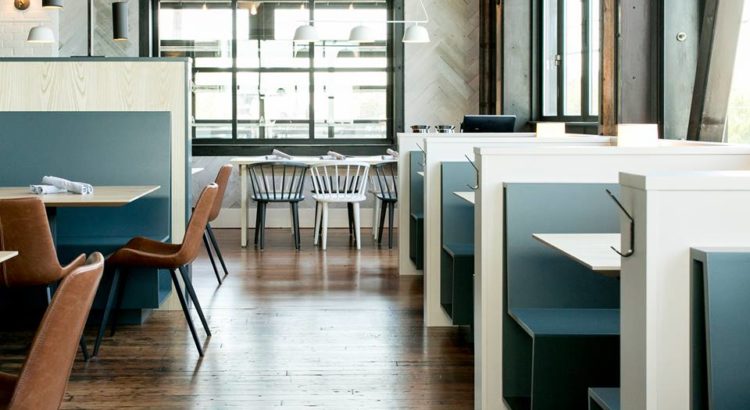 Americana chic is coming to Ballard, with the newest eatery Sawyer opening its doors in the former Kickin’ Boot location at 22nd Ave NW and Shilshole.

Created by former Lark chef Mitch Mayers, Sawyer gets its name from the building’s previous life as a 1920s sawmill. It’s been redesigned from its Kickin’ Boot decor, with a “casual yet chic, modern vibe,” according to Seattleite. Mayers is a Washington state native and was named one of Zagat’s 2018 “Eight Under the Radar Chefs to Know in Seattle”.

Designed for family-style sharing, the menu features comfort food with a “focus on technique,” as the restaurant puts it. They’re going for a gourmet “homey style” with entrees such as fried potato Jojos and chicken wings with blue cheese sourdough puree and peach buffalo sauce, and mains such as oxtail nachos, rotisserie chicken and wood-grilled salmon steak.

The restaurant seats up to 115, and their hours are Sunday through Thursday from 4pm to 10 pm, Friday and Saturday from 4pm to midnight, and with a Sunday brunch soon to come.

Can’t wait to bring my 3 barking dog babies in for some $100 mac n cheeze!
Ballard is so chic and sophisticated.

Rumor is they will soon introduce a special menu for fur children with $50 mac n cheeze. Another bright day in Ballard!

$18 for a wedge salad! I wonder what restaurant will be replacing them?

Someone needs to make book. I say gone in less than a year. Remember the Cakery? LOLOLOLOL The whole wedge salad thing is hysterical in any place. What sort of moron orders what takes 2 minutes to prepare?

Are you having wedge issues?

LOL They dropped the price to $15. Still a joke. You are cooks people not artists. I buy art and it gains in value. This will end up flushed. Seriously though, this sort of thing is why so many young people can’t afford to buy houses.

The place has all the appeal of a school lunch room and the name is an embarrassment.

I don’t complain your wife charges too much on Aurora. Let them charge what they want for a salad. Too pricey? Don’t go.

I guess this blog has finally gone inexorably off the rails.

Beta response.
Also, there is no good salad on Aurora.

So where are all the customers to park their cars when the Missing Link goes in? Or will everyone be on a dockless shared bike – especially in February?

Technique? For fries and burgers. LOLOLOLOL

The menu sounds good, but I agree that it’s on the spendy side. Especially their Wedge – it’s costlier than surrounding items that I’d consider a main dish. Does the wedge salad contain protein (other than cheddar) they forgot to list? Or was an extra digit accidentally added, and it supposed to be $8, not $18?

But…peach Fresno Buffalo BBQ sauce is among the things I’d like to try. I saw several things that might well be worth driving to and parking in downtown Ballard (no nighttime or weekend Metro bus service in our part of Ballard). I hope they make it.

Why is everybody so damn angry?

They aren’t really angry. Just offended by the over priced menu. Here’s a suggestion to all would be restaurateurs. Open a diner with normal every day food without fancy names. Make sure it tastes great and is priced within this stratosphere.

While you are discussing the cost of menu items consider the effects of the 17% increase in property tax this year, which means higher building rent. And then there is the phasing in of the $15 minimum wage (nearly the highest in the entire country) which hits every business along the way that supplies fruit, veggies, dairy and meat, the servers, dishwashers and the guy who takes out the garbage to the curb. It just costs more to live and work here, and that is a harsh reality.

Now about that expensive wedge salad – typo or for real?

Waiters don’t have to be paid $15. You pay their salary in addition to the bill.

That’s not true. Do we have to go over this again?

“This separate wage policy is somewhat unusual for Seattle, as the state of Washington, like California and five other states, does not allow employers to use tips as a credit against their minimum wage obligations.”

I stand corrected and will begin to tip at European levels. Other $15 don’t get tips but please feel free to tip at Bartell.

Sorry about your lack of disposable income. Wendy’s is only a couple blocks away. You don’t have to tip there.

Psst…you don’t have to go there. Lark was amazing. It’s good to see another great chef in Ballard.

Can we all assume then that you tip a OFC and Walgreen’s? It’s the right thing to do. Idiots don’t understand that not buying a 50 cent cost salad for $18 is why people have disposal income and can afford a house.

You have no idea what you are talking about. Waiters make gratuities to put up with DBs like yourself,.

What’s an example of a successful place like this in central ballard? I can maybe think of a couple. It seems like the only successful places with cheap food move a lot of drinks.
The problem with that space is its very large so needs a lot of customers..but it’s on a side street. Kicking boot had enough customers for a small bar, not a huge restaurant.

It’s going to ECHO…ECHo…ECho…Echo…echo…in there

Angry? We are laughing.

Because they’re angry that the neighborhood that they lived in is changing. What they’re most upset about is that they don’t understand it, so the only thing that they can do is complain about it, which they do in droves. The scariest thing to baby boomers is change.
Ballard is an awesome neighborhood that keeps getting better and better as a new diverse group of people move in. I’ve lived here for 40 years, and every year is better than the last.

Andrew Daisuke is the kindest, bravest, warmest, most wonderful human being I’ve ever known in my life.

Guest
Not a Boomer

Annnnd another swing and a miss by Daisuke.

I get angry about more and more local restaurants adding the insulting “living wage surcharge” to their bills, including this one. Yes, please pay your employees a living wage. That’s why I voted to increase the minimum wage. No, don’t insult me by throwing it back in my face with an opaque surcharge at the bottom of the bill. Just raise your prices like any other business does when their cost of doing business goes up. El Camion did not add a “lime shortage surcharge” to their bills when the cost of limes went up.

Do you also get angry at the sales tax line and when they split it out by item?

@Pat
If you haven’t already figured it out yet: most things in Seattle are a hustle to scam well-meaning but naive people out of their money.

Hope they have a lot of capital cos they may need it. Pricing is expensive and to be honest, I don’t know what half of the stuff on their menu actually is. I might take a flier on this place once in a while but, regular repeat custom ? Highly unlikely.

Guest
When you're here, you're family

If Sawyer can bribe us with endless bread sticks, I might be in!

LOL @ wierd and different, Maybe to a sububanite. Ballard is white bead.

I think the menu looks great!
And, I have no problem with the 3% added to go to back of the house staff. I want folks to make a living wage… Those who work here should be able to live here.

If the prices are too high, or the food isn’t appealing, then don’t go. It’s pretty simple.

Do I wish the Denny’s was still on the corner of Market and 15th? Yah, sometimes I do. A cheap, greasy spoon still has its appeal… I’ll go to Beth’s when I get that hankering.

But I will always support businesses who want to invest in their staff because they’re ultimately investing in our community.

Guest
Feed My Cat or Else

What’s your position on provisions for fur children?

Can you elaborate? Or are you being sarcastic? 😆
I feed my 2 dogs at home. Their food comes from Mud Bay. I could get it cheaper elsewhere, online for instance, but I make a conscious choice to support a local business.
Similar to supporting local restaurants.

Please make a conscious choice to keep the “fur babies” off beaches (illegal, btw) and out of grocery and eating establishments. You know, like in other sane, sensible places. Namaste!

Hiya $50 Tater Tots….
Where, in my response to ‘Feed my cat…’ did you see me talking about where I bring my dogs?
A. It’s illegal on some beaches, yes. But not all. It’s best to look online or check the local parks signs. Golden Gardens? Yes. Discovery Park beach? No. Investigate before heading out.
B. Who brings their dogs to a grocery store? Unless it’s a legit service animal, of course.
C. I enjoy going to Norm’s or KISS Cafe with one or both of my dogs. Those are establishments that encourage bringing your dogs, and I take advantage.

Maybe spend less time regulating what other folks do and focus on trying to be happy. In a lot of your responses, your snark feels like a thin veil covering up some sadness.
May you never spend $50 on tater tots!
And I wish you health and happiness, $50TT.

@Wa Native
Thanks for being a considerate dog owner, however, sadly you are in the minority. The QFC in Ballard – despite posting signs “service animals only” – has selfish dog owners forcing everyone to “be ok with it” by passive aggressively bringing their dogs (junkie pit bulls? AWESOME) into the store.
Have a good one.

Ever heard of France, you dingdong?

Yeah but the newbies are too soft to climb back up the hill.

I bet both your dogs are white and fragile. Mud Bay is privilege.

LOL Not local. They are a chain.

I have lived in Ballard for 67 years. Never entered Denny’s or Manning’s one time.

Ah, Seattle.
Gotta love a town that hates the timber industry and rural types in general, yet covers itself in Pendleton plaid and names places like this after sawmills.

No one has worn plaid here in like 20 years

It is really a great and useful information part. I am very good
http://duckducklife.com/how-to-make-duck-chili/

I made creamy Cajun chicken pasta with a fresh baguette and salad, for 3, for well under $15.00 last night. Does anybody freaking cook at home any longer? I don’t want to go out to eat and pay somebody else’s Mercedes payments. And so much of the bill is caused by the very same people right here bitching. You asked for this and got it. All the $$ and hip folks DID move from Capital Hill etc. So you make too much money and can’t boil water. I feel terrible for you suckers.