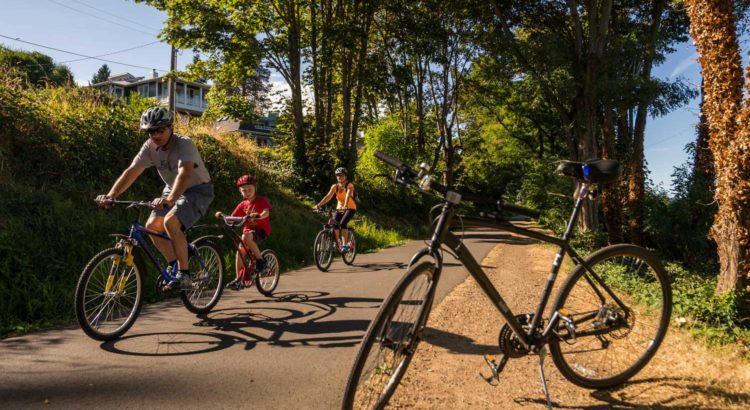 The city is rolling out some new policies for multi-use trails, including a 15-mph speed limit and regulations on what types of electric bikes are permitted. It’s part of a one-year pilot program from Seattle Parks and Recreation, and will affect five multi-use trails including the Burke-Gilman Trail, Elliott Bay Trail, Mountains to Sound Trail, Melrose Connector Trail, and the Duwamish Trail.

This is the first time a speed limit has been enforced on multi-use trails, a policy which comes from consistent complaints of speeding cyclists from trail users. In response to a new state law (SB 6343) that classifies e-bikes into three categories, the Parks department will allow Class 1 and Class 2 e-bikes (those that stop assisting riders at 20-mph) on multi-use trails. The only other motorized vehicles permitted on trails will be ADA-compliant mobility devices.

Seattle Parks will also be conducting surveys throughout the pilot, information from which they’ll use to make a final policy recommendation to the Board of Park Commissioners in summer of 2019. The first survey is available now, aimed at finding out who uses multi-use trails and current user experience on those trails.

What will they use, LIDAR?

I’ve been picked up by the road-side speed detectors on my bike. I have to get pretty close and there can’t be a vehicle close by, but they are sensitive enough in the right circumstances.

In reality, though, I think it’ll be pretty obvious who’s speeding.

Watch out, E-Bikers! Smokey Bear’s gonna nab ya! He will be on the BG in force.

What are you even talking about? Is this somehow related to forest fires in your brain?

LOL. Good luck enforcing that. I’ve got an ebike that does 40+, the only thing the cops have ever said to me is “cool bike.”

Yeah, and that tidy little expensive bike of yours needs a paid for license plate. You DO want to pay your fair share, right pal? You idiots on these things are right in and out of traffic like nobody’s business alright, speeding much of the time too. Yet how do you get caught running a red light or going too fast for conditions? Or, perhaps you’re too special to play along with the rest of us who must pay. And don’t even try to tell us how many autos you already license. In the days of incessant revenue enhancements, the time HAS arrived for you folks to pony up. Imagine leaving my property taxes alone for a few months while you pay for your play. WTF is our crazy city council waiting for here?

We already pay our fair share. Your kind of a dick hole!

The behavior you describe is typical of many pedal powered bikes…which are the vast majority. Is envy a problem??

There are “e-bikes” and there are motorcycles. Some of the ones I see on the Elliott Bay trail are motorcycles going 25-30 mph around blind curves that they have no experience to handle – swerving into the opposite lane. Only luck has prevented them hitting me or another bicyclist. It will happen at some point. A bicyclist who has progressed enough to handle 25-30 mph at least has the experience to mitigate the danger they pose. The motorcyclists on our trails do not.

You’ll be happy to know I’ve been riding mountain bikes for 35 years and keep my speed low around any blind corners.

I know how you feel, but there are plenty of cycling commuters that are unsafe. As well as general stupidity when it comes to most of the planet and smartphone use. I have been cycle commuting for 20 years in Seattle and have watched hundreds of human-powered bicyclist barely kill each other. I have seen cyclist complain about everything from bikes not having lights, to bikes having lights that are too bright, too bike having saddle bags that are too big. :D

In general, cyclist have no safely gear other then a helmet. It sucks getting in a wreck at 20 MPH. Someone who is being stupid on a faster eBike, Segway, eSkateboard, etc will learn a hard lesson eventually. The same is true for all the cyclists that average 22 MPH in the flats. While rare, human-powered cyclist have collided in the past killing each other.

Will Lime e-bikes be allowed on the trails? I don;t know what class they are. Thanks.

Lime e-bikes are not allowed on sidewalks, and yet there they are. Good luck with the enforcement of any bike rules. Making the rules is one thing, actually enforcing them is another. Sort of like street camping, littering and otherwise using planting strips to do things like take a dump or pee on the flowers (yeah gotta love that urine smell on the warmer days).

OK you really didn’t answer my question at all but thank you for playing.

That’s incorrect actually. Lime bikes are within the ebike legal definition due to their reduced wattage and top speed. This qualifies them as bicycles and in Seattle bicycles are allowed on sidewalks.

Yes and no. The laws in the state just changed so that ebikes are allowed on the sidewalks and separately Seattle is experimenting with allowing ebikes on some trails. King County trails (outside of Seattle) still prohibit all ebikes. An ebike is not considered a bicycle, bicycles are defined as solely human powered. Technically the ebikes allowed on trails and sidewalks are class one and two, limited to 20 MPH. Class three ebikes, exceeding 20 mph, can only be ridden on the roads.
Not that it matters one bit. People riding ebikes of all types have ridden them on the trails and sidewalks forever without regard to the law. And SPD has never enforced any of the laws concerning ebikes in the past and have already declared they are not going to enforce them in the future. The only time these laws will come into place will be when there is an accident and the person riding the class three ebike on a trail will be in jeopardy.
Oh, and be careful with your ebike outside of Seattle. Lake Forest Park police are notorious for actually enforcing the laws of the trail.

OK people. Focus! I just want to know this:

WILL LIME E-BIKES BE ALLOWED ON BG TRAIL? (ie are they Class 1 or 2 e-bikes).

Anyone capable of answering that without digressing to sidewalks?

They are either Class 1 or 2, because Lime Bikes are limited to 15mph. Class 3 is exceeding 20mph.

I believe the wording on the battery compartment on the Lime bikes say something to the effect that they cannot be ridden on sidewalks; whether that has changed by state law, ordinance or SDOT rule in the last few weeks, I don’t know. Regardless, eBike riders need to be mindful of their pedestrian obstacles or incurr liability for injuries.

I believe it is a bad idea for e-bikes on sidewalks regardless of power class.

Enforced how? The police can’t get to a crime in under 2 hours unless there’s a dead body. Oh wait they do give you parking tickets, though.
Also, those e-bikes are stupid unless you’re elderly or disabled. Get a motorcycle and get off the trail.

The police triage emergencies as they come, they could be right outside your house, but then get pulled away for Domestic Violence down the street. Parking enforcement officers are civilians -not sworn officers- that do not respond to emergencies. Imagine if all the people on the BG decided to take a car to work. Congestion and parking would be a nightmare! There is not enough room to widen roads. Riding and parking a bike takes less space than driving and parking a car.

I’m neither elderly nor disabled (well, I am 50 years old, so maybe that counts as elderly in your book?) and I love my e-bike because it makes it possible for me to commute to work by bike without requiring a shower and a change of clothes once I arrive. I also own a 150cc scooter and far prefer the e-bike: one less vehicle on the road (albeit a small one), no use of fossil fuels, free parking and, considering the traffic between Ballard and downtown Seattle, it’s actually faster to ride the e-bike to work (even factoring in walking across the Locks and adhering to the 15mph speed limit) than it is to drive.

lol whatever – just add this to the long list of rules/laws that will go unenforced in fantasy world present day seattle, where everyone is wonderful, criminals deserve compassion, and bums deserve to ruin our parks and greenbelts.

Every time I go on the trail, usually walking, the worst offenders are those riders all decked out in their expensive biking clothing. As they speed by you so closely on the left, they often do not ring a bell or say anything.and ignore the dismount signage as well. I hug the right edge of the trail and hope I don’t get run down. It’s time for bicycle licenses so violators can be reported. Bike riders should help pay for these trails, just like car tabs. Yes, I own a bicycle and follow the rules of the road, when I am in my car or on a bicycle. I even wear a helmet.

I agree with the former part of your post (there certainly are folks who think the Burke is their own Tour de France).

The latter point, though, is simply not true – cyclists pay the same taxes that drivers do. Local roads aren’t paid for by car tabs, but from general fund revenues (sales and property taxes, mostly). Most cyclists also own vehicles, so are paying car tabs as well, but those go to support highways and Sound Transit capital projects, not local roads.

So if someone speeds along the trail how are they going to identify the rider without a licence plate on the bikes ?

Really… people trying to avoid the hellish Seattle traffic situation? Most human-powered cycling commuters I ride with an average well over 22 MPH when commuting to work.

I know how to solve this problem. No one can have cars, bikes, etc. Everyone has to walk. And walk the same way. And hold hands… and sing the same song. A song that I get to pick… but don’t worry. It will be a good song.

I’m down. Love the whole “keep it simple” vibe.