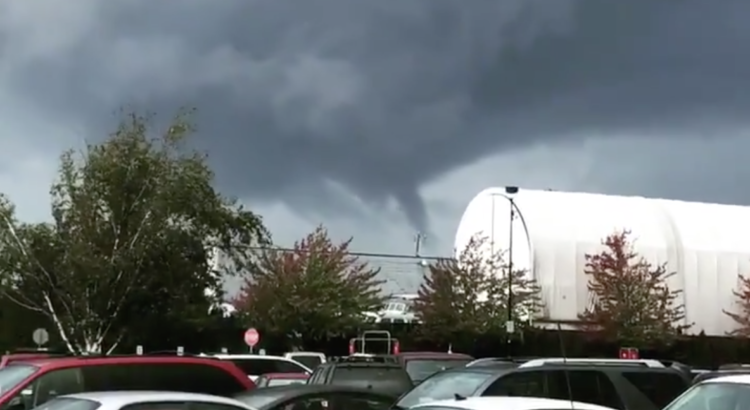 Matt Crissman was shopping in Ballard around 12:30 p.m. today (Sunday) when he spotted a funnel cloud in the distance to the west.

“(I) was about to walk into Fred Meyer and thought, damn, I really need to film this!” he told My Ballard. So naturally, he recorded it on video and posted it on Twitter:

Hey @NWSSeattle – caught this over in Ballard around 12:30pm. Radar was showing a decent cell moving NE at the time…. made for great video. 🌪 #darkclouds #rotation pic.twitter.com/0x8NI2E5bq

The National Weather Service in Seattle responded to his tweet, acknowledging it appeared to be a funnel cloud, which are much weaker than tornadoes and don’t touch the ground. It’s unclear if this one was over Ballard proper or over the water in Elliott Bay.

“Back in college, I actually started as a meteorology major, so it’s still a hobby for me,” Matt said. “The radar had been crazy all morning so (I) knew something could happen.”

Funnel cloud! It must be evidence of… something? Who wants to begin? How does this funnel cloud prove what you’ve been saying?

Oh wow! All these people moving here are bringing the weather with them! Haha. Just kidding!

These images are at the least frightening … Unfortunately Mother Nature does not choose places or people, and when she arrives, we have to know how to safeguard and accept that we can not control.

Guest
Wicked Witch of the West

Somebody tell the social justice coven to stop with their baby sacrifices and Moloch worship.

Fitting for the storm parade

Whelp, this just proves we need a carbon tax!

Now I am very for touch of my best record http://gethelpwindows10.com microsoft windows 10 help support and this card fun now give you full access and authority where you can think lots of many tricks. So just try to connect with it.