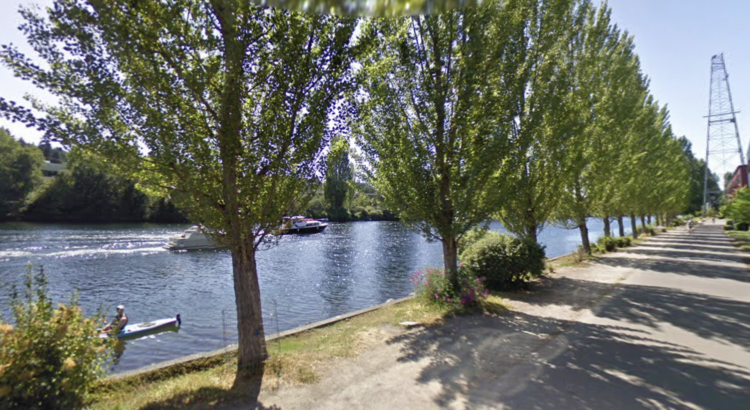 Later this month, 18 poplar trees will be removed along the Ship Canal’s Fremont Cut. The work is being done by the U.S. Army Corps of Engineers Natural Resource program, who say they will be replanting the trees next year.

“We’ll begin planting replacement trees in spring 2019 as the next step of phase 3,” Natural Resource Manager for the Ship Canal Connie Grant said. “The new trees will be about 12-feet-tall and typically grow two to three feet per year.”

The tree removal is part of a multi-year rehabilitation program, which began in 2001. Broken into four phases, the work will continue until 2030.  In Phase 1, the Corps removed 22 poplars and planted 53; Phase 2 was in 2010, and included the removal of 32 poplars and the planting of 40. They are currently in Phase 3, in which they’ll remove and replant 18 poplars, maintaining as many existing young trees as possible. Phase 4 will be in 2030, during which they’ll remove 22, and replant 21 poplars.

“Our plan to restore the aging poplar colonnade in a historically appropriate manner is comprehensive, practical and environmentally sensitive,” Grant said.

The calendar for work is still being organized, and they say a portion of the Burke-Gilman Trail may be temporarily closed during the tree removal. The work could start as early as Oct. 8.

These trees were never popler!

Neither was your spelling class, apparently.

I don’t get it? His spelling class wasn’t popular?

Sorry, I can’t rescue every idiot.

But can you enjoy every sandwich?

Better put trees back fast before the junkies take over

I’m confused. Why do they see a need to take these trees out and replace them?

The trees are aging and grow fast

I second the question. The article should have given us a reason why this needs to be done. Is something killing the trees? Are their roots affecting the retaining walls?

Unless they are diseased, it makes no sense. Maybe replace every third one to keep
the plantings healthy over years… I thought we had a shortage of funding for parks.

Hi Sharon, This is phase 3 of the plan. The program began in 2001. There is another phase planned for the canal. This keeps the plantings healthy over the years. I am not sure of funding shortages in the Seattle Parks Department. In my opinion, the department seems to be well managed.

The article mentioned the Corps of Engineers is doing this so probably not a Seattle Parks funding situation.

old fremont would have never allowed this. we need to chain ourselves to the canopies!

Old Fremont would have gotten wasted on cheap wine and PBR, staggered out to the canal, grabbed for a tree for support, missed and gone into the drink!

this is true, tho your more likely to hit the rocks there first than the drink lol. its an inadvertent safety feature.

Maybe they can remove ALL of the tents while their at it. Once beautiful safe spot to enjoy a stroll on the BG velodrome.

You mean the “dog baby drome”?

While they’re at it? A contraction of they are rather than their! You must have gone to school in Ballard!

This is the politically correct way to evict the illegal campers. “Excuse me please, we’ll need you to move aside until we can replace the trees you’ve killed with your urine and feces.”

I wrote a song to stop this kind of thing!

Move along. Nothing to really see here. Just some trees being aborted. I am pro-choice when it comes to trees.