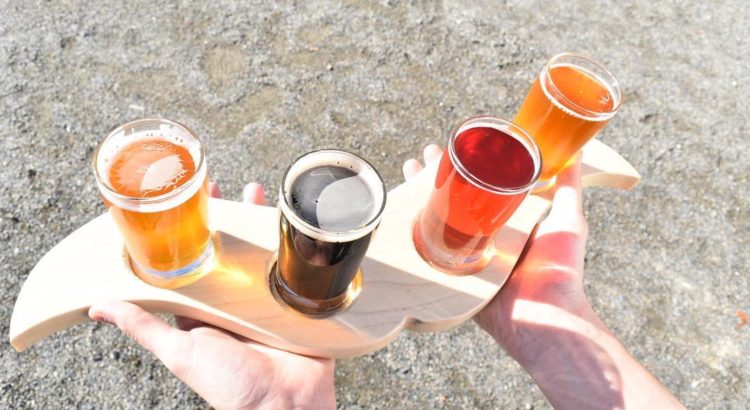 We’re quite lucky in Ballard to have nearly a dozen local breweries, many of which are constantly pumping out new creations and hosting community events such movie nights and fundraisers. There’s quite a bit on the agenda for the Ballard breweries in the coming weeks, so here’s an update on all things Ballard beer: 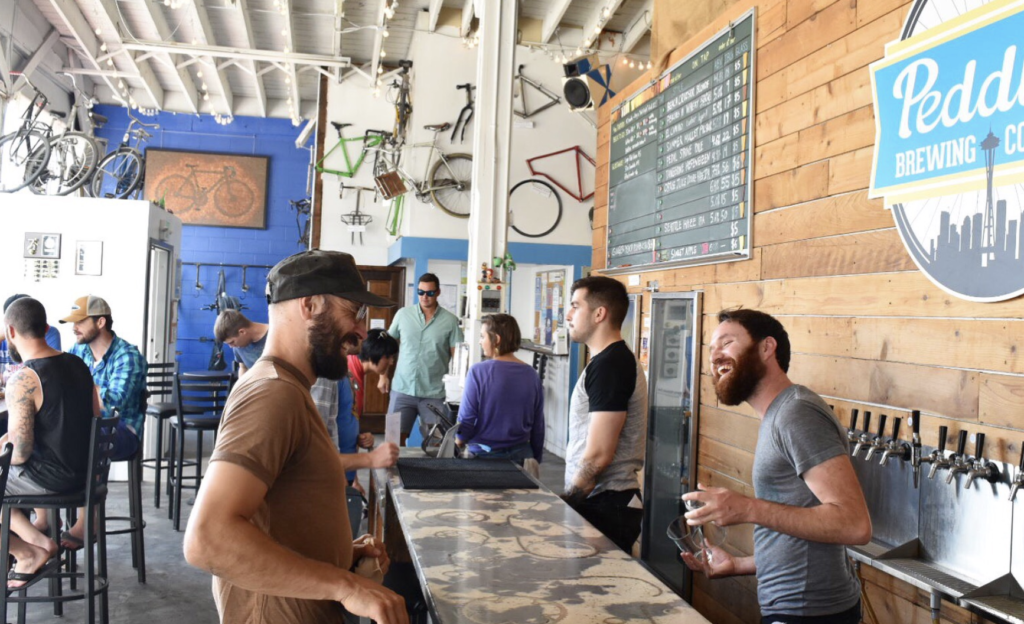 Tonight (Nov. 28) Peddler Brewing Company is once again hosting Astronomy On Tap, which will focus on astrobiology. Tonight’s speakers are Joshua Krissansen-Totton, who will talk about “understanding life using billion-year-old rocks”; and Michael Kipp, who will speak on the “critical ingredients to make life on alien worlds”.

Other upcoming events are Babies in Arms Happy Hour on Dec. 2, the Elf Movie Night & Blanket Drive in Peddler’s heated beer garden on Dec. 6, and a holiday dog party with Santa on Dec. 16. Peddler is constantly hosting events — check out their full line-up here. 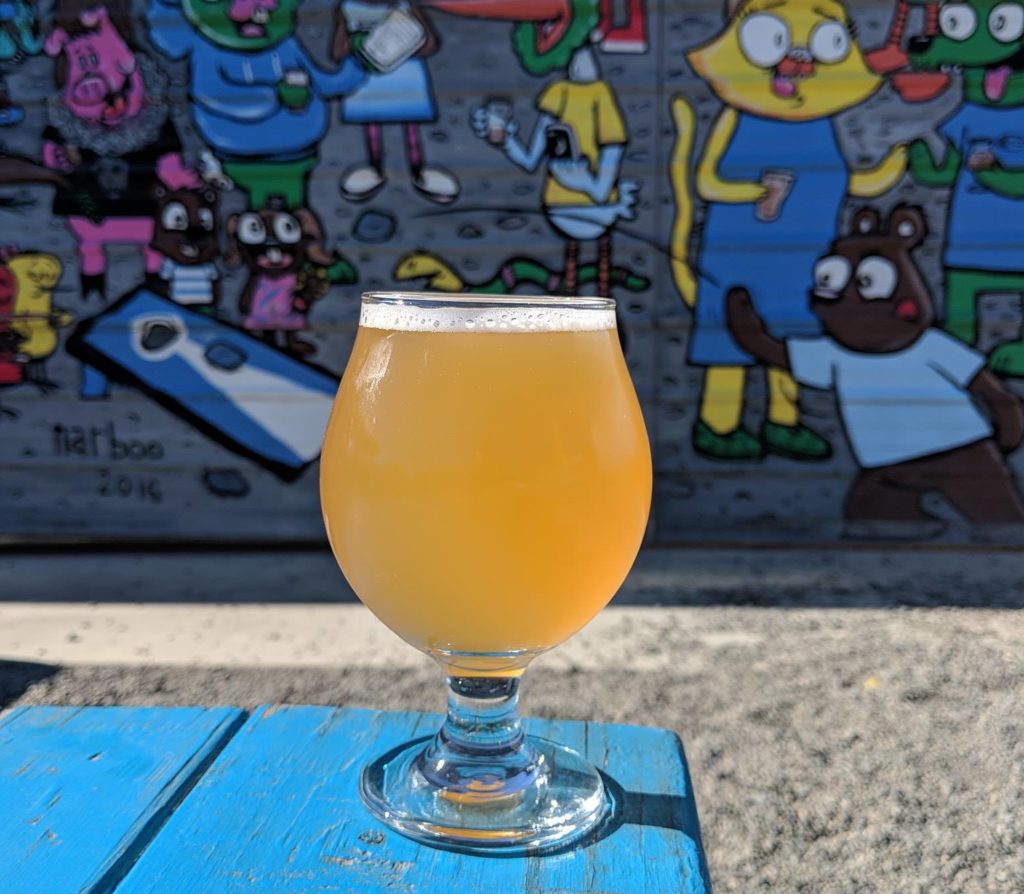 Populuxe Brewing is about to release their Field Trip Sour on Dec. 1, a collaboration with Ravenna Brewing. The new sour is a “blended barrel aged sour ale fermented with passionfruit and aged in oak,” Populuxe says, adding that it’s “tart and fruity with a slight funk”. Later in December, they’ll release the Old Oddvars Ale, “a rich and malty ale that pays tribute to the locally famous auto shop which used to be housed at the brewery’s location”, which they say is “dry, smooth, delicious and dangerously drinkable”.

Populuxe will host a couple events in December, including Star Wars Trivia on Dec. 5, a kid’s holiday card-making party with Santa on Dec. 8, and their 4th annual ‘Orphan Christmas’ on Christmas Eve. 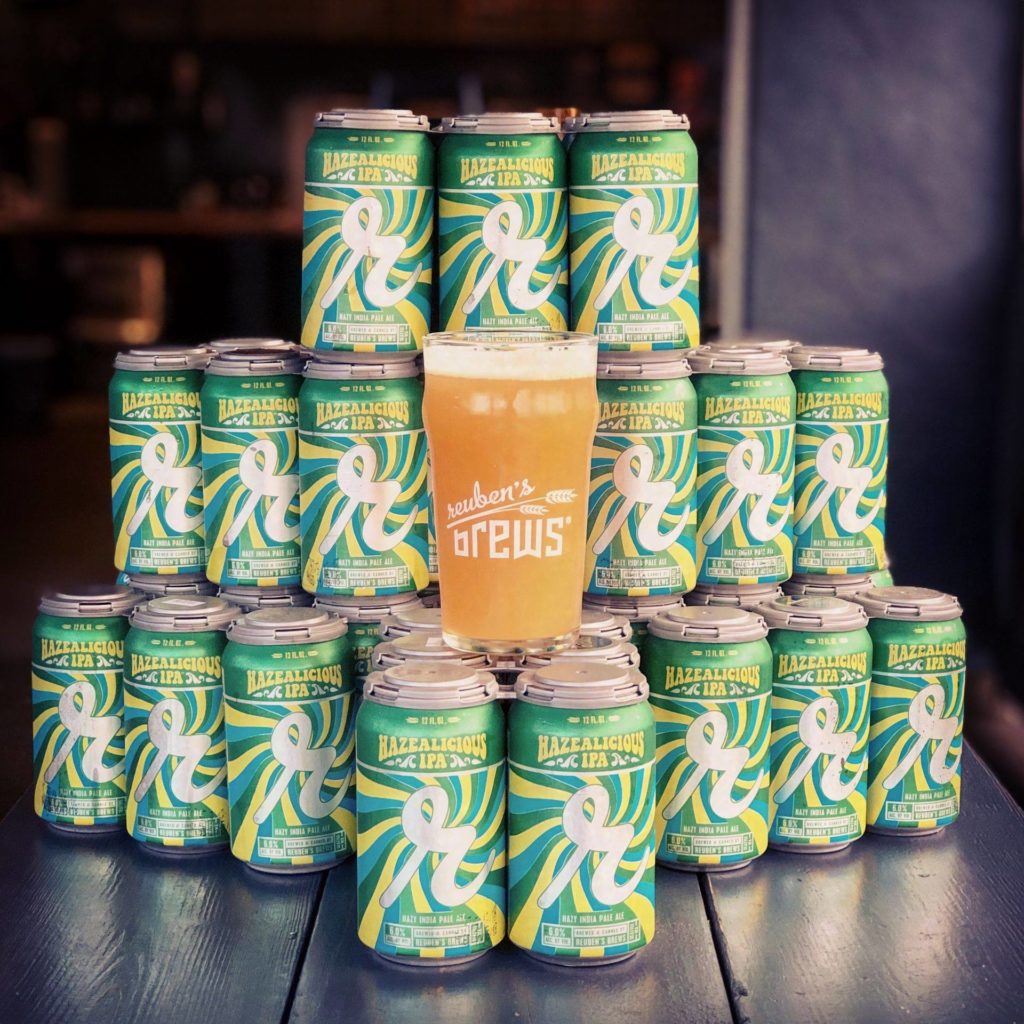 Reuben’s Brews has just released their 120th beer of the year, called the Hazealicious IPA. Many of their creations this year have been hazy IPAs, which, owner Adam Robbings said is turning into their specialty.

“Hazealicious is an evolution of all that we’ve learned from brewing this style, which includes some process and recipe twists that we believe are unique to us, paired with some of our favorite hops. We are excited to make this beer more widely available for people to try, all year long,” Robbings told the Washington Beer Blog.

Reuben’s is also getting ready to open a new brewing facility — more on that in the coming weeks. 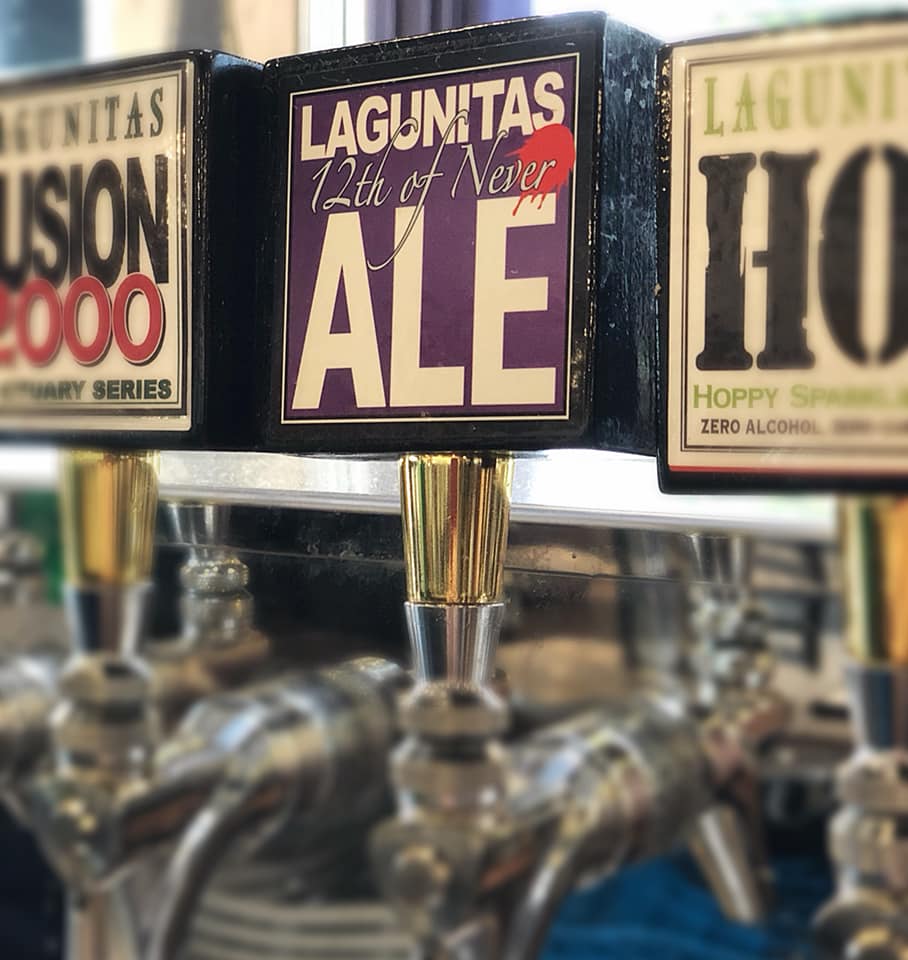 Lagunitas Brewing will soon host Prison Scholar Fund event called ‘A Johnny Cash Night Out‘ with singing, trivia, games and beer on Dec. 4. The fundraiser will also include a Johnny Cash look-alike contest, and proceeds from purchased beer will go to help fund education and employment assistance to incarcerated people. 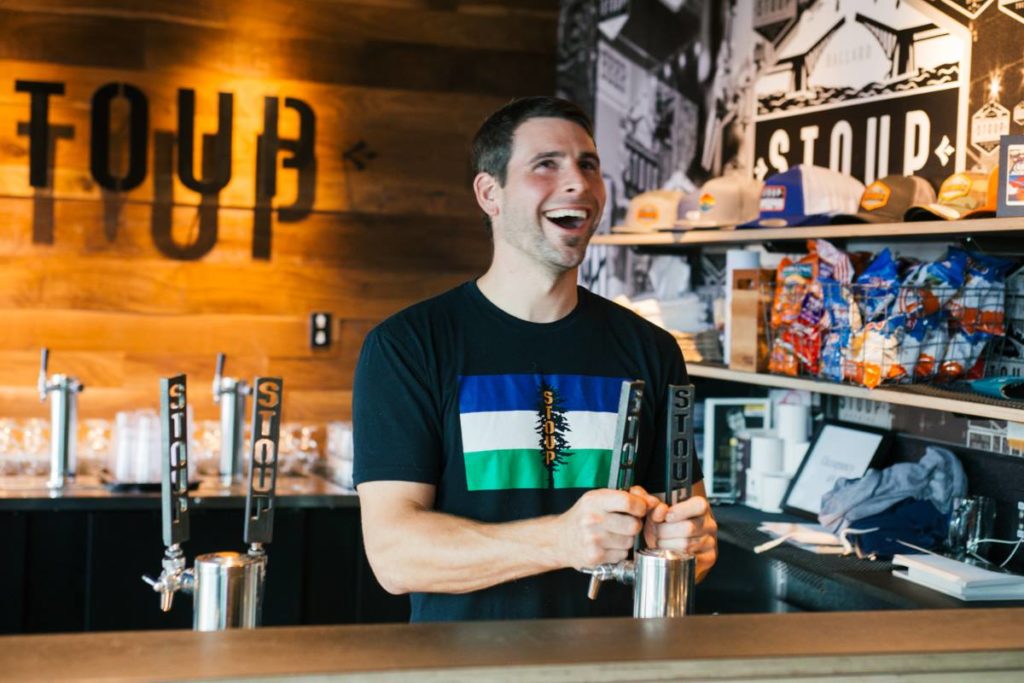 Stoup Brewing, who recently released a collaboration brew with Airways Brewing Company, is going to deconstruct their Zoigl beer collab. Here’s more from Stoup: “We decided on a Zoiglbier-style wort share, where we brewed a German lager at Stoup but before fermentation, Airways hauled some of the wort down to their brewery,” the brewery wrote on their event info. “Both of us fermented our own halves with our own house lager yeast strains. On December 3rd, we’re serving the two beers side-by-side to see how a brewery’s yeast and fermentation profiles affect the final beer. Come enjoy this uniquely German tradition with us in the tap room that night.”

Stoup also has a holiday event coming up — photos with Santa and a holiday market will be on Dec. 11. 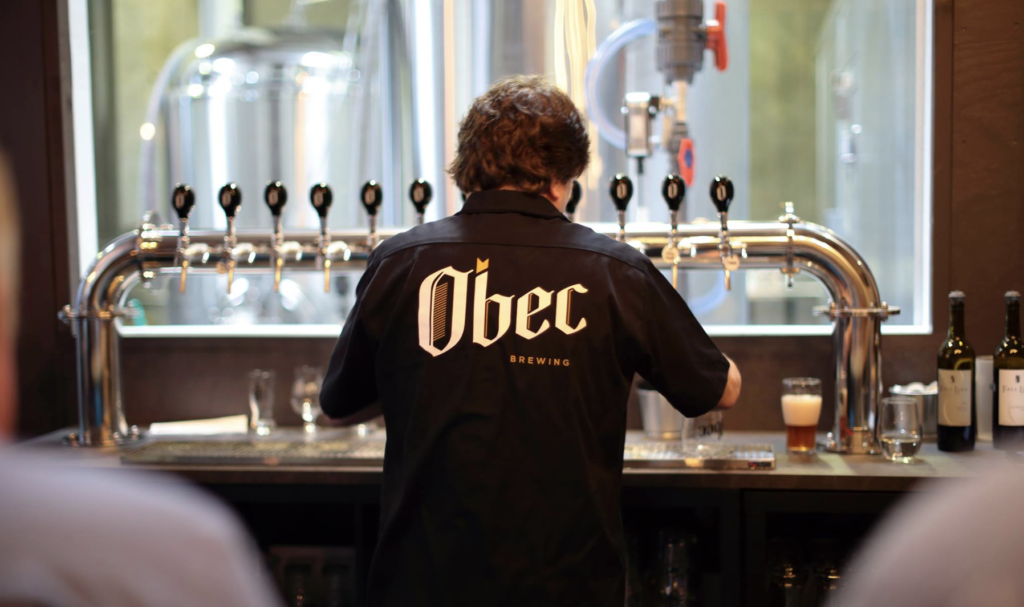 Obec Brewing will team up for the city’s Jingle Bell 5k Run on Dec. 9, gathering at Westlake Center and meeting up after. You can join their team by clicking here.

On Dec. 20, Obec will host their Traditional Festivus Celebration, with some added Obec quirks. From Obec:

“First, participants must stand next to the metal pole and air their grievances about people they’ve interacted with during the past year. One cannot advance to having snacks or competing in the feats of strength until they have aired their grievances.

“After participants have aired their grievances, they can have snacks. Wich Wagon will be on site with tasty eats!” Then, “According to Seinfeld, there is only one real feat of strength–everyone must wrestle the head of the household. Obec participants can choose from three feats of strength: Option 1: heat tolerance. Participants will compete to hold a hot-out-of-the-dishwasher Pilsner glass from the bottom. Option 2: “wrestle” the bartender (thumb or arm).

“Upon completing all three elements, Festivus goers will receive a token redeemable for $2 off any full pour of beer / flight rack (6+).” 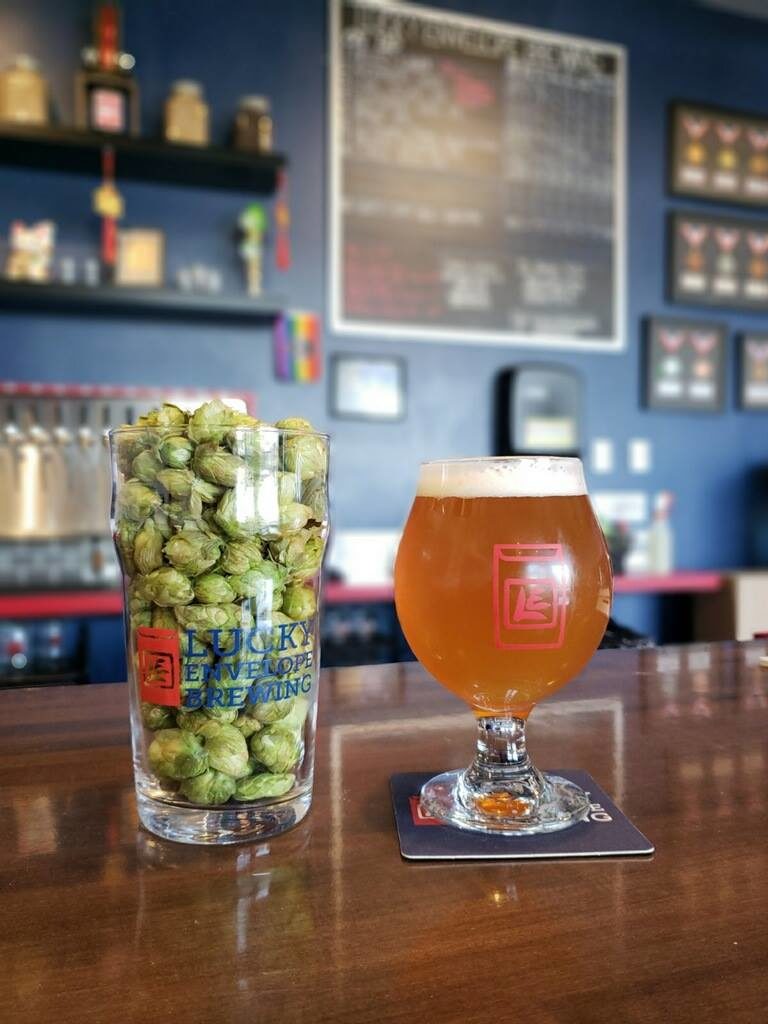 If you want to share any other Ballard beer news we have missed, email us at tips@myballard.com.

This article is obviously incorrect since Reuben’s doesn’t make IPA’s. Never have, never will.

Love these .glass holders? Where are they from??? Thanks!

Peddler is the the absolute worst brewery in Ballard. Blows my mind that people actually go there. Though it does attract a very specific crowd…

Peddler is good beer to people who like Durkan/O’Brien etc.

Nah. Hale’s stopped making good beer long ago. Or maybe it’s that everyone else got better and they just stayed the same. Either way, they’re kind of lagging behind and I’m happy that they kind of acknowledged that and are reimagining their operation.

I made a point to try every brewery in Seattle in 2017 and Hale’s was among the bottom five for me. Sorry Hale’s.

Microbrew is beer for alcoholics who pretend the weekend is not lost.

Microbrew is an old and tired word. Like Grunge.

Yeah they should call it a Beer Share and rent ounces by the minute. Very Hip and Now

The words these guys use to describe their beer sounds like an open admission of their incompetence as brewers.
Sour..
Hazy..
Slight funk.
A bunch of wankers with beards and overpriced tee shirts!
And a ‘passionfruit ale’? What are we trying to do here, get the City Council to hang out in Snoose Junction?
Don’t get me started or we are going to be here all night while you listen to my grievances.

It’s just become and endless, irrelevant shitpost circle jerk from the resident Sockpuppet. They’ve attempted and succeeded to drown out any and all intelligent discourse and there’s no use in keeping it active.

Even the comment section for an article about breweries has devolved into a bunch of useless drivel from a sad, tiny handed man, still living in his mother’s basement, emerging only when she yells at him to go buy more pork rinds.

Have you aired ALL your grievances?
You can’t advance to the snacks until you do.

Go home Truth, you’re drunk. How much of a pathetic whiner are you?
Make a counter statement, or ignore a comment.
Here’s a better idea: grow a pair.

Poor old Truth hates it when he walks into a place that doesn’t hew to his standards/beliefs/whatever. You ever hear of ignoring comments? Ever hear of avoiding the things that bother you? You’re so self-absorbed and self-satisfied that it never occured to you that some places aren’t going to magically bend to your will and/or desires.

I really hope you’ll decide to just leave and never come back. Are most of these comments ridiculous? Yes, of course they are. Are they written by one person? Two? Ten? Who cares? Why do you care? No one cares but you. 90% of what gets posted here is worth an eye roll and nothing more. You want to make a federal case out of it.

Go away. You’re actually what’s wrong with politics in this city…your smug, whiney, my way or the highway mentality turns people off and I am sorry that we actually agree on a lot of political things because I watch how you make your points and it just turns everyone off.

I know this will send you into a delirious tirade, but your shitposts are not standards or beliefs, they are the delusional outburst of a mentally ill individual.

Sorry lover, you and your multiple personalities can’t get rid of me that easy. :-*

I,m sure the little fat ” Keebler Elves ” be there for the Elf movie night ..ha ha